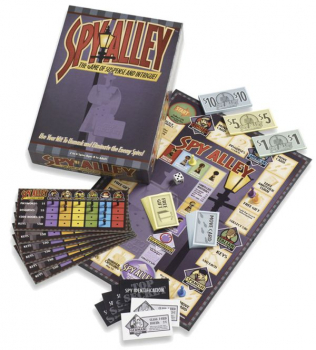 It's spy vs. spy in this game of secrets and strategy. Each player gets a spy identity card and can then win the game in either of two ways: 1) collecting each of the spy items (password, disguise, code book, and key) for your spy's country and then safely getting your game piece to your country's embassy, or 2) looking at the evidence on your opponents' scorecards and removing other players from the game by guessing their spy identity. Players receive money, with which they can buy spy items when they get the opportunity, and the scorecard, for keeping track of what spy items they have. The scorecard has all six spies listed and players can collect items for any of these countries - that's where you strategize about what you collect, trying to throw other players off the scent as they endeavor to figure out, from what you have collected, who your spy is. Moving around the board, you have opportunity to buy spy items, collect free spy items, confiscate materials from other players, and take guesses as to the spy identities of your opponents. It's a simple game but be careful - that doesn't mean it's a walk in the park. 2 - 6 players. ~ Zach