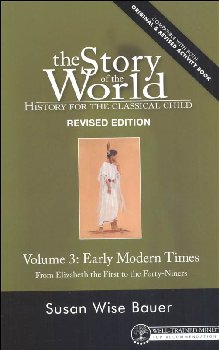 Subtitled “From Elizabeth the First to the Forty-Niners,” this volume of Story of the World takes another good-sized bite out of world history. The forty-two chapters are told in a similar style to the first two volumes, with each chapter divided up into shorter readings of a couple pages each, just enough to grab most children’s attention and keep it until they begin to tire of history, and their minds begin to wander. And Susan Wise Bauer’s exciting and engaging way of putting the “story” back into history, chances are they may even be begging for more! Like the other volumes, she also does a terrific job of taking the typical “European” slant out of her telling of world history, while incorporating events and people from all over the world in her chronological presentation, giving children a much more “complete” picture than they would likely otherwise get. As with the other volumes, this book is not meant to cover everything in the time period, but to hit the high points and serve as a springboard to explore people, events, and eras more thoroughly as desired. Topics covered in Volume 3 include Japanese warlords, colonies in the “New World”, spread of slavery, the “Sun King” of France, English in India, imperialist China, revolutionary war, Captain Cook’s explorations, age of industrialism in Europe, Napoleon, French Revolution, Lewis & Clark, Mexican independence, Africa and colonialism, the Opium Wars, the Gold Rush, and much, much more.

The text is available in a paperback or hardcover. The activity book is a bound paperback.- Jess