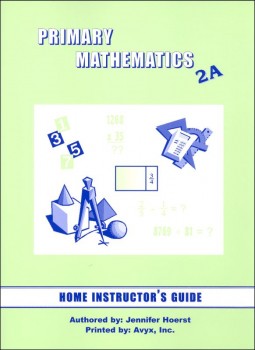 Primary Math US 2A Home Instructor Guide for 3rd edition

If you're looking for a little more help on how to teach Primary Math, these support guides are just what you need. Each guide provides a suggested teaching schedule, detailed notes to the instructor referencing specific course book pages, games and activities, complete textbook and workbook answers, step-by-step solutions for all word problems, and mental math pages. Suggested games and activities may require additional materials, such as a base-10 set, multilink cubes, hundred chart, etc. Currency replacement pages (depicting U.S. money) are also included. Guides for all levels can be used with both the Singapore and U.S. editions, although you may need to make minor adjustments for level 2B. ~ Anh