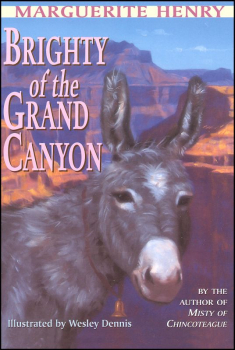 Brighty of the Grand Canyon

A lone little burro roams his home in the Grand Canyon, but his affinity for company, often in the form of people with flapjacks, gets him mixed up in more adventures than he ever counted on. After his friend dies, Brighty (named after the Bright Angel Creek) is kind of on his own. He does have one other friend that he summers with and who is willing to help out as long as nobody tries to make him do anything he doesn't want to do! Brighty ends up in scrapes with cougars and mountain lions, meets President Teddy Roosevelt, and even helps with the search for the murderer of his friend. Through it all his huge heart, antics, and unique character will keep readers smiling. ~ Megan