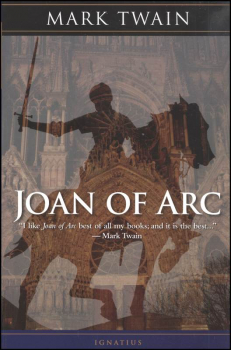 Joan of Arc by Mark Twain

Did you know that Mark Twain wrote a major work on Joan of Arc? I didn't either! However, Mark Twain himself stated, "I like Joan of Arc best of all my books; and it is the best" He spent twelve years researching detailed accounts written by both the French and the English, and two years writing. This story is amazingly told (remember, it is written by one of the best storytellers of all time!), as Twain ingeniously has a fictional man by the name of Alden, translating a fictional memoir by the narrator and Joan's long time friend, de Conte. This is an extraordinary book about an infamous woman, written by a literary phenomenon. Pb, 452 pgs. elise