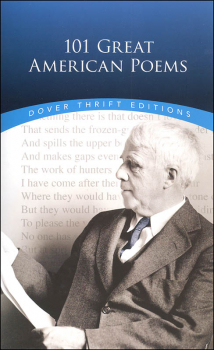 An inexpensive "thrift" edition of some of the best poetry by American authors. Poems were selected for their popularity and their literary qualities. Some poets/poems included are: Edgar Allan Poe's "The Raven"; Walt Whitman's "I Hear America Singing"; "Old Ironsides," by Oliver Wendell Holmes, Sr.,"Thanatopsis," by William Cullen Bryant; "The Road Not Taken," by Robert Frost, plus selections from Vachel Lindsay, Paul Lawrence Dunbar, Emily Dickinson, Ezra Pound, T.S. Eliot, Marianne Moore, and many others. 80 pgs, pb.

Focusing on popular verse from the nineteenth and twentieth centuries, this treasury of great American poems offers a taste of the nation's rich poetic legacy. Selected for bothpopularity and literary quality, the compilation includes Robert Frost's "Stopping by the Woods on a Snowy Evening," Walt Whitman's "I Hear America Singing," and Ralph Waldo Emerson's "Concord Hymn," as well as poems by Langston Hughes, Emily Dickinson, T. S. Eliot, Marianne Moore, and many other notables.
Chosen by the non-profit organization American Poetry & Literacy Project,these much-loved verses include 13 selections from the Common Core State Standards Initiative: "Casey at the Bat," "Fog," "The New Colossus," "Chicago," "I, Too, Sing America," "O Captain! My Captain!," "Paul Revere's Ride," "The Road Not Taken," "The Raven," "Because I Could Not Stop for Death," "Mending Wall," "The Love Song of J. Alfred Prufrock," and "The River Merchant's Wife: A Letter."