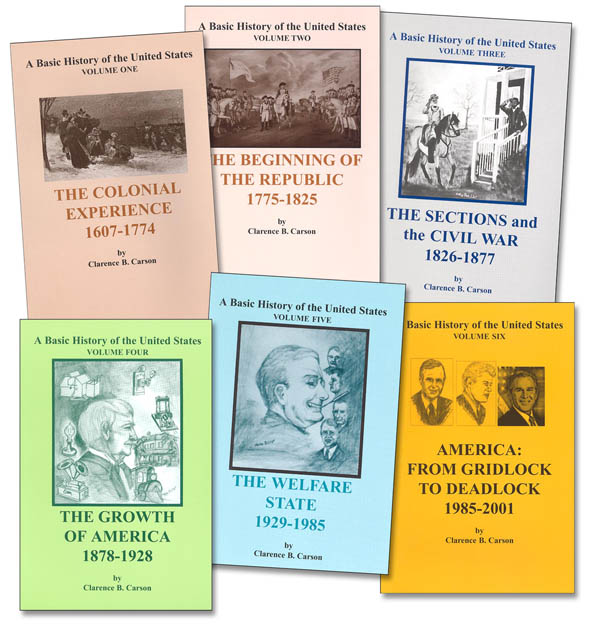 Category Description for Basic History of the United States:

Back in print, this scholarly series from conservative author Dr. Clarence B. Carson provides a solid historical survey of American history from the early 1600s through the Presidential election in 2000.

Volume 1, The Colonial Experience, begins with our European background, travels through the establishment and growth of the colonies, and explores the establishment of education, self government and the free economy.

Volume 2, The Beginning of the Republic, summarizes the great freedoms that were developed during the years of 1775-1825 and includes the War for Independence, creation of the Constitution, establishment of the government, and the expansion of our nation.

Volume 3, The Sections and the Civil War, explores the impact of the rapid growth of our nation, the rise of regional division and sectionalism, encompassing westward expansion, the Civil War and Reconstruction.

Volume 4, The Growth of America, focuses on the growth and development of the United States from 1878-1928 including the settlements in the west, subduing of the Western Indians, the transcontinental railroad, nationwide businesses and the development of large financial institutions. Also explores naturalism, socialism/Marxism, and progressivism and their impact on our growing nation.

Volume 5, The Welfare State, 1929-1985, looks at the Great Depression and the New Deal, World War II, the Cold War, Vietnam War and the radical cultural changes of the times. Common conservative ideals and the conservative response are included.

Volume 6, America: From Gridlock to Deadlock, focuses on the standstill in government and politics that occurred from 1985-2001. Also explored are the philosophical and religious divides that have occurred, the debacle of the welfare state, the collapse of communism, the impact of media and internet, and the world of work and business.

Each softcover volume includes suggestions for additional readings, a glossary and index. The Teacher's Guide contains summaries, important points to emphasize, discussion questions, terms and activity suggestions to augment readings. A Christian worldview is evident, primarily in volumes 1 and 6. Excellent for the serious student of American history, this comprehensive series provides the older high school and college student with a view of our American heritage that challenges the status quo regarding individual liberty, limited government and the principles of freedom and the moral framework this great nation was built upon. ~Deanne

Primary Subject
History/Geography
Grade Start
9
Grade End
AD
Format
Product Bundle
Brand Name
Boundary Stone
Weight
0.0 (lbs.)
Powered by TurnTo
Questions that need answers | My Posts
Start typing your question and we'll check if it was already asked and answered. Learn More
Do not include HTML, links, references to other stores, pricing or contact info.
My question is about: 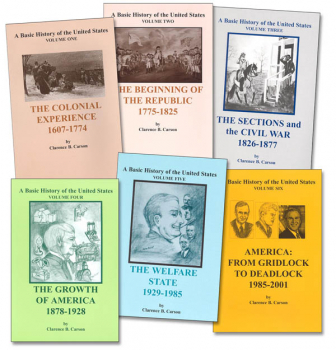