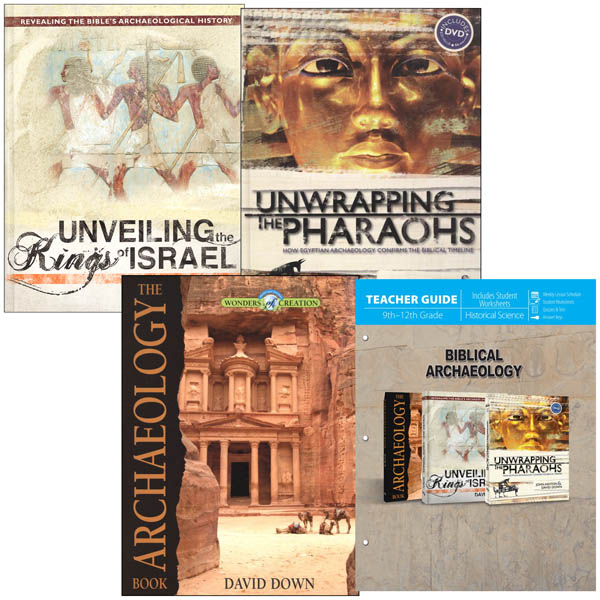 You will learn both the techniques of the archaeologist and the accounts of some of the richest discoveries of the Middle East that demonstrate the accuracy and historicity of the Bible. You will unearth: how archaeologists know what life was like in the past; why broken pottery can tell more than gold or treasure; some of the difficulties in dating ancient artifacts; how the brilliance of ancient cultures demonstrates God's creation; history of ancient cultures, including the Hittites, Babylonians, and Egyptians; the early development of the alphabet and its impact on discovery; the numerous archaeological finds that confirm biblical history; and why the Dead Sea scrolls are considered such a vital breakthrough.

Authors David Down and John Ashton present a groundbreaking new chronology that supports the biblical account. Go back in time as famous Egyptians such as the boy-king Tutankhamen, the female pharaoh Hatshepsut, and the beautiful Cleopatra are brought to life. Learn who the pharaoh of the Exodus was and where his pyramid is in this captivating new look at Egyptian history. The DVD includes a breathtaking journey through the pyramids and temples of Egypt. Go deep into ancient tombs and discover the fascinating architecture and history of the pyramids. See how discrepancies in biblical and secular chronologies are easily reconciled.

Unveiling the Kings of Israel

Study the history of the small nation of Israel, including the troubled and devastating periods of loss and exile once lost to time. Far from being a book of myths, the Bible is an amazing historical record and each year, more archaeological discoveries continue to prove its validity and significance. Follow the intriguing clues found buried in ancient cities, on the walls of early monuments, and in the written records of our world's oldest civilizations. Walk the ancient streets, explore the distant temples, and unearth the compelling history that continues to resonate with the world today. As you study fascinating accounts that fill in some of history's unwritten record, you can follow the Biblical timeline through detailed photos and examples.

Primary Subject
History/Geography
Grade Start
10
Grade End
12
Format
Product Bundle
Brand Name
Master Book Publishers
Weight
0.0 (lbs.)
Powered by TurnTo
Questions that need answers | My Posts
Start typing your question and we'll check if it was already asked and answered. Learn More
Do not include HTML, links, references to other stores, pricing or contact info.
My question is about:

Powered by TurnTo
Review More Purchases | My Posts
5.0 / 5.0
3 Reviews
5 Stars
4 Stars
3 Stars
2 Stars
1 Star
3
0
0
0
0
Rated 5 out of 5
Love this curriculum....
My son is into Archeology, and this was perfect for him. I also purchased Joy Hakim's three books to go with this set to make the curriculum more rounded, and fuller. Very easy to follow directions, beautiful photos, and easy to read fonts. Great for any age, but it does need adjusting for the different age levels. You will need to add more to it.... for the middle and high school aged homeschoolers.
March 24, 2022
Christina A
Purchased
1 year ago
Rated 5 out of 5
What a fantastic, fun elective!
I definitely recommend this for grades 8-12. It isn't hard, but the questions are geared at that level. Younger kids could do this without the tests. It takes my 10th grade average student about 30 minutes a day, a little less or more depending on the specific assignment. She loves it!
September 15, 2020
Sherilyn B
Purchased
over 2 years ago
Rated 5 out of 5
As Wonderful As I Hoped It Would Be
We are a week into the curriculum and so far it’s a big hit with my teen. We are on the first book “ The Archaeology Book”. It’s easy to read and absorb, and it Is packed with cool photographs. The teachers guide makes this course even more pleasant with its suggested daily schedule and chapter worksheets, which also serves as a a great chapter summary. The nature of the questions make the worksheets a pleasure and not a chore for my teen. ie. why are inscriptions found on ancient pottery valuable to archaeologists? Why did Woolley not excavate the cemetery as soon as he found it? We are looking forward to reading “Unwrapping if the Pharaohs” and “Unveiling the Kings of Israel”. The pictures and content look so cool and interesting. More importantly, I love how the author links historical record with the Bible. He links scripture verses with the readings to help his students connect the dots for themselves. The Biblical Archaeology Package is such a gem!
June 1, 2020
Carol S
Purchased
over 2 years ago 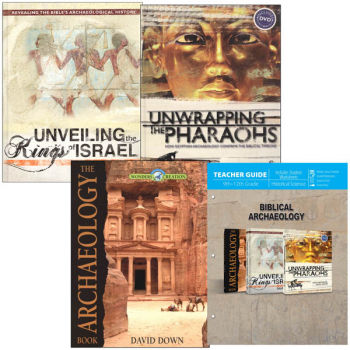