Taking a topical approach to scientific discoveries, this well-illustrated resource from Usborne introduces us to the famous and other not-so-famous scientists who have made earth shattering hypotheses or discoveries that have changed the way we understand the world around us. Within these pages, readers meet Gertrude Elion who made a drug that enables the bodies of patients to accept transplanted organs which saved numerous lives and earned her the Nobel Prize, the Physicist who invented the first battery, and more. There is mention of the father and son team credited with introducing the “widely accepted” idea that meteors caused the extinction of dinosaurs. Overall, an engaging and educational resources that introduces us to known and lesser-known scientists who have made a mark in their fields.

From atoms to X-rays and from the Big Bang to the Internet, brilliant breakthroughs by successful scientists have changed the world again and again. Dip inside this intriguing book to read the stories of 100 scientists and their amazing discoveries, including Marie Curie and Albert Einstein. With Usborne Quicklinks to specially selected websites where you can meet amazing scientists and try online activities. 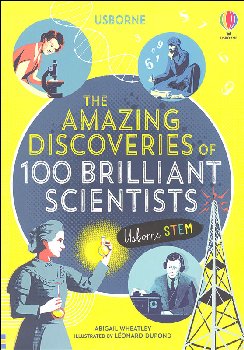