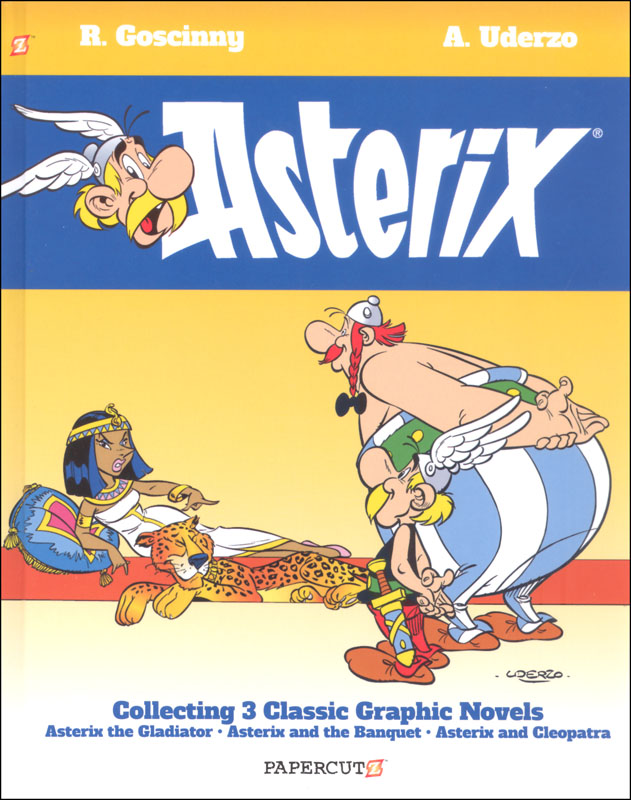 After conquering Europe, where this feisty, little warrior is a true pop culture super-star, Asterix is invading America with another three classic adventures, newly translated into American English. Asterix conquered Europe ironically by keeping his tiny village in Gaul from being conquered by the Roman Empire. Turns out, Asterix and his fellow villagers have a secret weapon, a potion that imbues them all with super strength. But the Romans aren’t about to give up no matter how many times Asterix and his friends fend them off. These classic comics are not only incredibly entertaining, filled with humor, adventure, and great characters, but the historic figures are brought to life in a way that’s exciting and humanizing, providing educational elements to each story, similar to the Geronimo Stilton graphic novels.

Ancient history course a little dry? Kids needing to come up for air every ninety seconds in a desperate attempt to divert attention elsewhere? Maybe you're even somewhat thankful when they do...? Asterix and Obelix are your ready-to-use answer! Set in Ancient Rome - the year 50 BC - when "Gaul is entirely occupied by the Romans. Well, not entirely..." One village of indomitable Gauls still holds out against the Roman invaders, and while you might imagine that life is hard for these villagers, it is even harder for the legionaries in the fortified camps surrounding the village. A secret potion gives the Gauls invincibility for a short time, making it very hard for the legions of Roman soldiers to ever get the upper hand. They get a break now and then, though, as the many adventures of Asterix, Obelix, and Dogmatix (man's best friend) take them all over the ancient world - from Persia and India to Egypt and Athens, Switzerland, Britain, Corsica, Belgium, Spain and many other places in between. The authors have masterfully captured the characteristics of each nationality and region and used them to create this hilarious series of comic books which bring the ancient world to life. Without even realizing it, children will be introduced to the different foods, ways of dressing, languages, architecture, and customs of these ancient peoples. The cartoon drawings are very detailed and comical and are accompanied by an expertly written text full of word play and puns. While there is also a lot of fighting between the Gauls and the Romans - and the Gauls and the Gauls - it is all in a similar style to the old Batman series on TV - Bong, Pow, Biff, Crash, and nobody's ever hurt more than a band-aid, a black eye, and some stars around the head. Written back in the 1960s, this timeless series was a favorite when my brothers and sisters and I were kids - and I still don't think you will find a better comic on the market. They are printed in the UK, so there are some British-isms, but they just add to the flavor. So join Asterix, Obelix, Dogmatix, Cacofonix (the bard), Vitalstatistix (the chief), Unhygienix (the fishmonger), Geriatrix (the village senior), Fulliautomatix (the blacksmith) and the rest of the village as they hold tight to their independence from Julius Caesar's Roman legions. - Zach 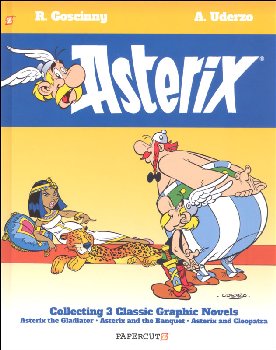