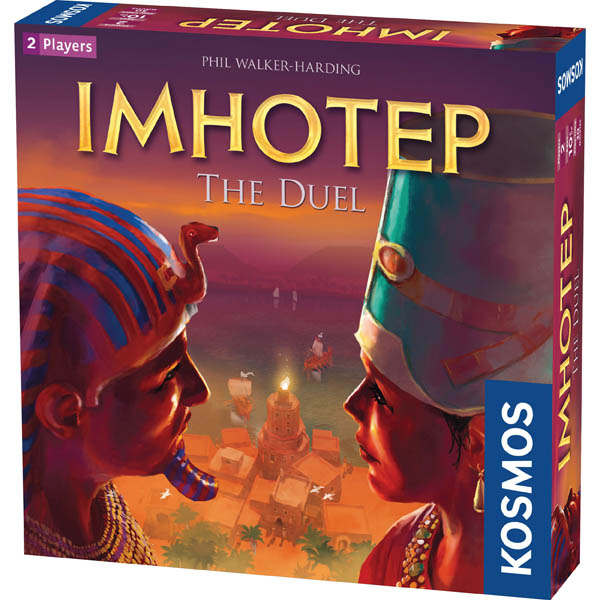 In Imhotep: The Duel, players can go head-to-head as they try to collect valuable tokens to build their monuments, gain the most points and win the duel! Each player will need to strategically place their game pieces on the board so that they can unload the cargo tokens from one of the six boats that surround the game board. In doing this they can use the cargo tokens they acquired to build up their monuments and increase their point total. Cargo tokens can also consist of action tokens that players can cleverly use to gain an advantage. The player that gains the most points from their building sites, unused action tokens, and game pieces still active on the board wins. This is a two-player game that will last around 30 minutes.

The competition of the builders continues in Imhotep: The Duel! In this game, players take on the roles of Nefertiti and Akhenaten, one of ancient Egypt's most famous royal couples. Game pieces must be cleverly placed so that players can unload the most valuable tiles from the six boats. While this is happening, each player builds their own four monuments in order to gain as many points as possible.

Primary Subject
Games, Puzzles & Toys
Grade Start
5
Grade End
AD
EAN
814743014411
Format
Other
Brand Name
Thames and Kosmos
Weight
0.95 (lbs.)
Dimensions
8.0" x 8.0" x 1.88"
Powered by TurnTo
Questions that need answers | My Posts
Start typing your question and we'll check if it was already asked and answered. Learn More
Do not include HTML, links, references to other stores, pricing or contact info.
My question is about: 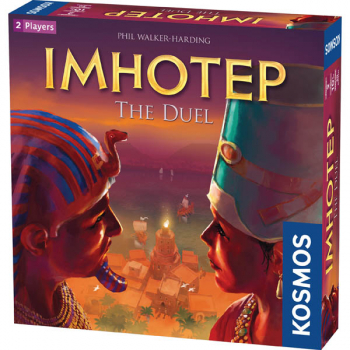