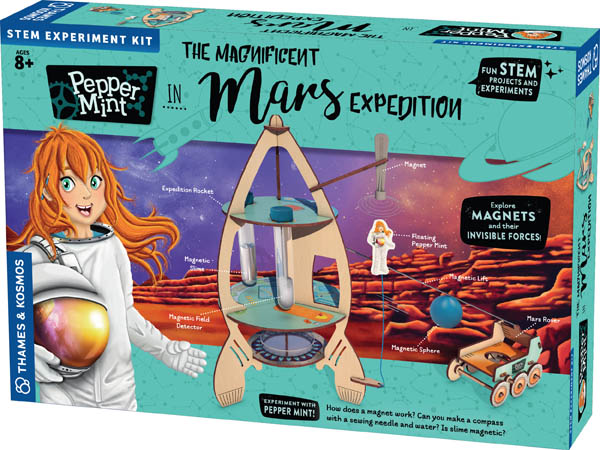 Shoot for the stars – or actually Mars – with this fun kit. Learn about magnetism and other invisible forces using magnets to help Pepper spacewalk, study magnetic fields with iron fillings, make magnetic slime, control a mini Mars rover, build a compass, and more!

Pepper Mint's adventures continue, this time in space! In this story-based STEM kit, our creative young heroine goes on a mission to the Red Planet, making all sorts of out-of-this-world scientific discoveries along the way. As you read the story, you can embark on a scientific journey as well. First, you'll use colorfully printed wooden panels to construct your own models of Pepper's rocket ship experiment-and-play station and Mars rover. Then, it's time for the experiments: From floating astronauts to magnetic slime, Pepper Mint accompanies you every step of the way!

Just as with the other kits in the award-winning Pepper Mint line, your rocket ship and Mars rover models can be used long after the fun of experimenting alongside this curious young engineer is complete. These models become the setting for infinite adventures and storylines limited only by your imagination! Combine models from other Pepper Mint kits to embark on a truly extensive, fun (and educational!) playtime adventure.

Engineering and science. It's what makes the world work! Pepper Mint, an eleven-year-old girl, loves figuring out how things work and making inventions large and small. Join her on her many adventures and follow her challenges to build useful contraptions. Along the way, learn about the principles of physics, what makes machinery work, and engineering. In each kit, Pepper sets off on a new journey - maybe into the jungle, maybe into the sea - and creates or uses systems that you build. For instance, in the Underwater Science Voyage Kit, she must build a hydraulic powered crane when the electricity on her ship goes out. After you make the system with her, the manual explains the principles behind the machine (like how force is transferred with water), how it works, and encourages you to experiment with design. A fun, hands-on way to learn about and explore physics and engineering principles. - Janine 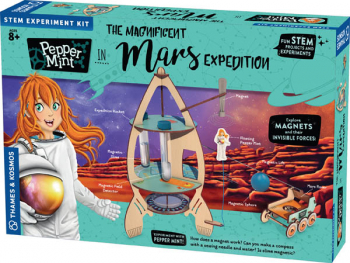