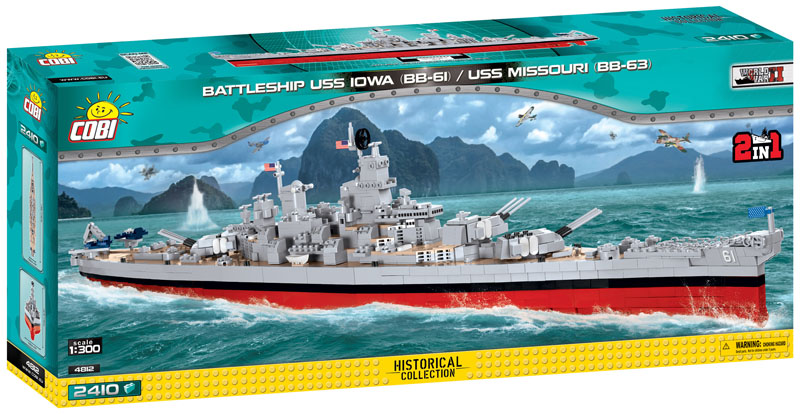 The USS Missouri (BB-63) is an American battleship Iowa Class that is also known as "Mighty Mo" or "Big Mo". This is the last battleship built by the United States. It was on board this ship, September 2, 1945, that the act of surrender by the Empire of Japan was signed, officially ending World War II. The ship participated in many operations including the battle of Iwo Jima and Okinawa, and in the Korean War.

This new construction block model from COBI is faithfully produced in 1:300 scale. With 2,400 blocks it will be a welcoming challenge for all builders. It stands a noteworthy 91.5 cm (30") long and 20 cm (7.9") high. The fine details put into this set will ensure collectors of military or maritime models will love adding this to their collection. It features moving parts such as towers, artillery gun barrels, propellers and rudder.

The kit is accompanied by a special exhibition stand with the name of the ship printed on a block plate.

This special edition is produced under license from the popular online game World of Warships.

Primary Subject
Games, Puzzles & Toys
Grade Start
4
Grade End
AD
Note 1
Item only ships to contiguous U.S. destinations. It will
Note 2
automatically cancel if shipping to non-contiguous U.S.
EAN
5902251048129
Format
Other
Brand Name
COBI
Weight
8.4 (lbs.)
Dimensions
13.0" x 30.0" x 4.75"
Powered by TurnTo
Questions that need answers | My Posts
Start typing your question and we'll check if it was already asked and answered. Learn More
Do not include HTML, links, references to other stores, pricing or contact info.
My question is about: 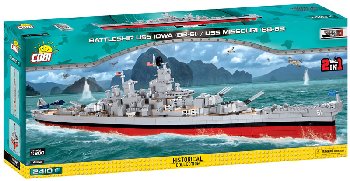