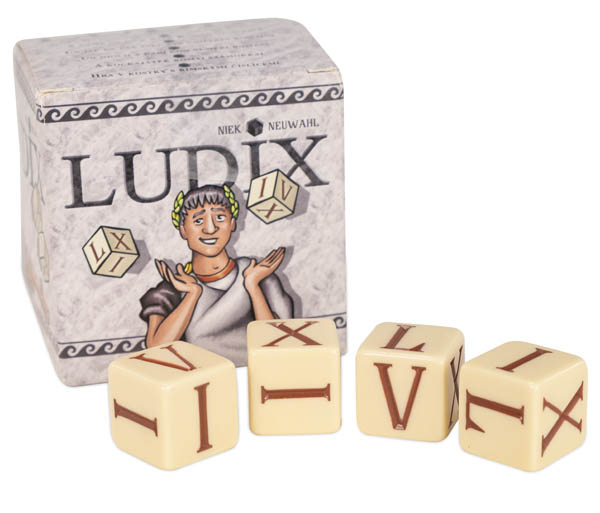 This game is a great way to practice Roman numerals. Be the first person to score 300 points or more. The game box contains 4 special oversized dice (with the faces L, X, X, V, I, I) and a rules booklet (written in multiple languages) that contains some history on dice in ancient Rome, as well as a little history on Roman numerals. In addition to the dice you will need a pen and paper to keep score. 2-6 players, average game time 35 minutes, ages 10 and up ~ Stephanie

But you dont need a degree in Latin to win a game of Ludix", the new game of dice by Piatnik. If you know your Roman numerals you have a competitive advantage. But be careful, if you are unable to form a Roman number with the dice you risk losing all your points!

The Romans loved playing with dice as we know from countless archeological discoveries. In cooperation with the Swiss Museum of Games, Piatnik has developed a game for 2 to 6 players from age ten upwards that rewards courage and an ounce of mathematical skill.

Primary Subject
Games, Puzzles & Toys
Grade Start
5
Grade End
AD
EAN
9001890633898
Format
Other
Brand Name
Piatnik
Weight
0.3 (lbs.)
Dimensions
3.0" x 3.0" x 3.0"
Powered by TurnTo
Questions that need answers | My Posts
Start typing your question and we'll check if it was already asked and answered. Learn More
Do not include HTML, links, references to other stores, pricing or contact info.
My question is about: 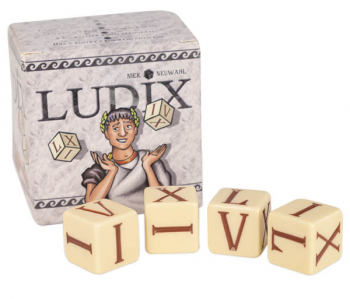