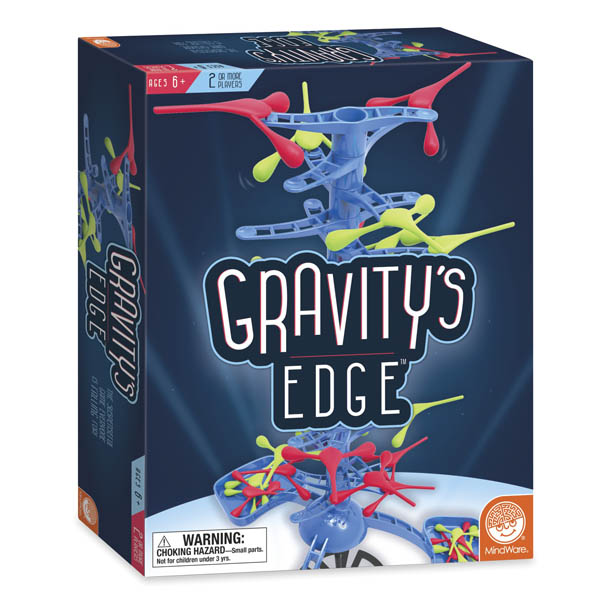 In the same vein of physical dexterity games as Suspend!, this game uses the constant but unpredictable force of gravity to push your balancing skills to the limit! A central "Gravitational Pole" somewhat resembling the body of an artificial Christmas tree is placed in the center of the table to begin. 3 counterweight baskets protrude near the base and are filled with several different styles and weights of "tipping point." Each turn, players take a tipping point of their choice and add it to a spoke of their choice on the pole. As more weight is added, the pole starts to tip and wobble. Maybe you can make it harder by putting this heavy weight on the far side- oops! There it goes! When any pieces fall off the pole, the last person to successfully put a piece on wins! For 2 or more players.

When you play Gravity's Edge, you'll need to do more than just follow the rules. You'll need to follow the laws of physics! Players take turns placing the weighted Tipping Points one by one. As each new Tipping Point is added, the tower's balance becomes increasingly unstable. The longer the game goes on, the more intense each turn becomes! Try to bring the game into balance or push the limits to leave your opponents out on a limb. Whatever you do, don't let gravity get the best of you or you will topple the tower and lose the game!

For two or more players
Easy to learn and quick to play
Teaches an understanding of physics, taking turns, cooperative play
Comes with: gravitational pole, 28 tipping points, base, rules

Primary Subject
Games, Puzzles & Toys
Grade Start
1
Grade End
AD
EAN
889070593564
Format
Other
Brand Name
MindWare
Weight
1.75 (lbs.)
Dimensions
13.0" x 10.62" x 3.12"
Powered by TurnTo
Questions that need answers | My Posts
Start typing your question and we'll check if it was already asked and answered. Learn More
Do not include HTML, links, references to other stores, pricing or contact info.
My question is about: 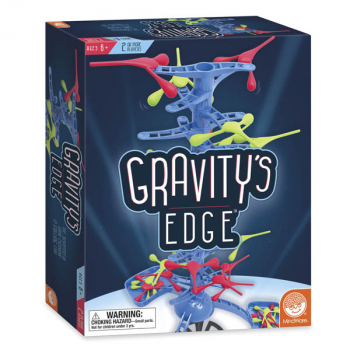 Gravity's Edge Game
Item # 074180
Our Price: $24.95
In Stock. Item will be unavailable when sold out.
Add Group
Continue Shopping Proceed to Wish List