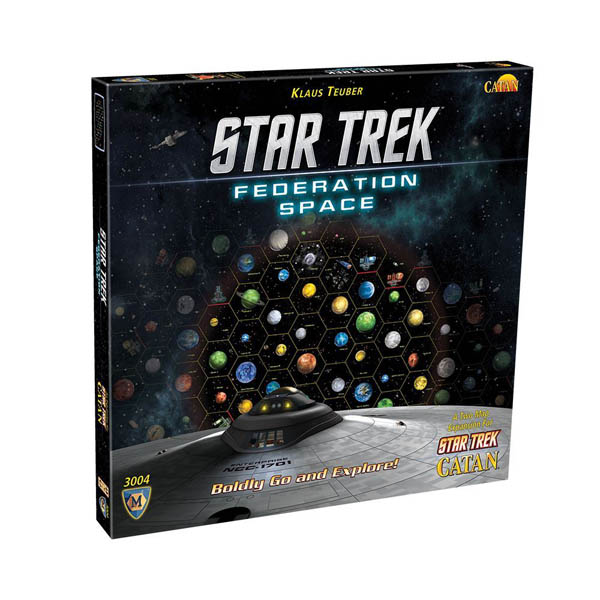 This expansion to Star Trek Catan includes 2 new maps for Star Trek Catan featuring the "known universe" of Star Trek. Also provides 4 scoring tracks & markers, 18 Victory Point tokens for new ways to score, and an Almanac with descriptions_1 of the planets & episodes featuring them. Please note that this is a expansion only and it is not able to be played without the original Star Trek Catan.

In other words: "These are the voyages of the Starship Enterprises."

To play "Stark Trek Catan - Federation Space," you will need the game material from the "Star Trek Catan" base game.

During the original mission, the Enterprise, Captain Kirk, and his intrepid crew visited many strange new worlds, and discovered many new life-forms and civilizations. Now you and your friends can Boldly Go and explore this galaxy too! Follow in Kirk's "footsteps" with this 2 map expansion set.

Based entirely on the "Explored Galaxy" map seen in Kirk's quarters itself, these maps allow you to settle the famous worlds of Federation Space using pieces from your Star Trek Catan base game.

One might not think Catan would lend itself well to the Star Trek universe, but this recreation of the classic does so perfectly! All the core gameplay of Catan remains, wrapped in the beautifully thematic sci-fi universe fans have come to know and love. Players collect dilithium, tritanium, food, oxygen and water by building Starships (roads) and setting up Outposts (settlements) on the corner of resource tiles. Upgrading Outposts to Starbases provides additional resources - you get the gist. Spicing up the usual fare are Helper Cards styled after the original Star Trek cast. These provide players one-time benefits to use at their discretion: trading at a 2:1 ratio without a port, keeping excess cards when a 7 is rolled, etc. Star Trek fans may try to forgo this clever rendition, but as we all know, resistance is futile! For 3-4 players. ~75-minute playtime. 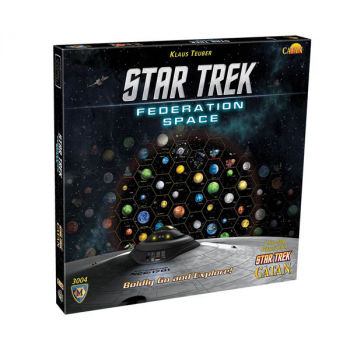