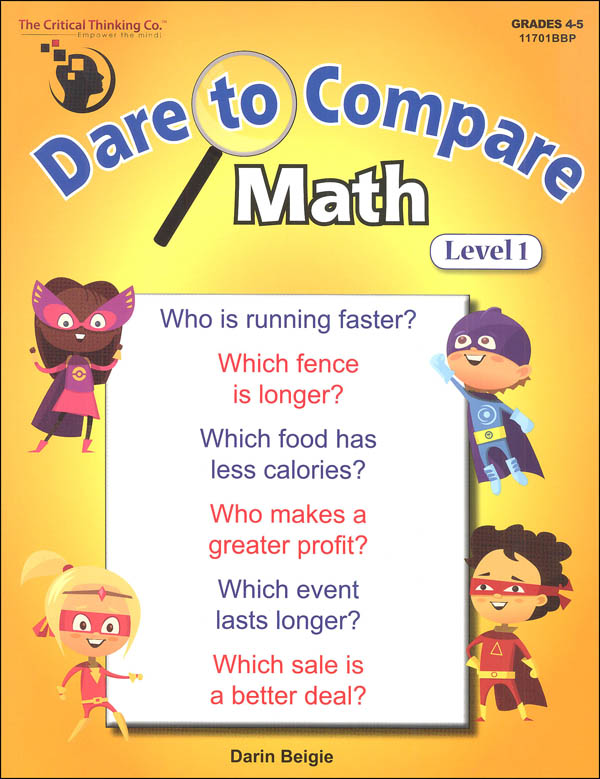 This collection of 150 problems asks students in Grades 4 and 5 to perform calculations to make a comparison and come to a decision. TheDare to Compareformat recasts more traditional math problems from a single calculation to two or more calculations to come to a final conclusion. Rather than compute a single sale price, the student computes two sale prices to determine which sale is a better deal. Instead of calculating the number of fat calories in a single food item, the student calculates the number of fat calories in two separate food items to determine which has the least amount of fat calories.

The problems are intended to be non-routine but accessible. The solution process is open-ended, allowing students to create mathematical reasoning and to decide how to quantify in order to formulate a conclusion. Comparisons are especially suited for problems involving fractions, rates, ratios, and proportional thinking. However, they can serve as a backdrop for any mathematical topic - geometry, graphing, patterns, elementary algebraic reasoning, probability, counting, measurement, number operations, and logic. So the comparisons are rich in both mathematical content and critical thinking. Each problem is accompanied by one or more hints and a complete solution.

Which fence is longer? Whose heart beats faster? Which food is less expensive? Who travels the furthest? Which collection of coins is worth more? Which shape has a larger area? Which sale is a better deal? Which fraction is larger? Which jar holds more water when full? Which food has less fat calories? Who makes the greater profit? Which event lasted longer? Comparisons provide a motivating backdrop to perform mathematical calculations in a wide range of contexts.

Exactly the sort of practice needed to make math practical in everyday life. Which is a better deal? Pizza for $1.50 a slice or all you can eat for $10? Or rather, how many slices do you have to eat for it to be a better deal? Of course, not all of the 150 problems are quite so pertinent to the life of a middle-schooler but the ability to make mathematical comparisons; to complete the necessary multiple calculations; and come to logical and correct conclusions is an important math and life skill. This workbook makes an excellent supplement to any math program and encourages the student to take note of all the comparisons in the world around him. In typical Critical Thinking Press form, the books are easy to use, provide complete solutions in the back, including hints for each problem, and are reproducible for home or classroom use. 92 pgs, pb ~ Janice 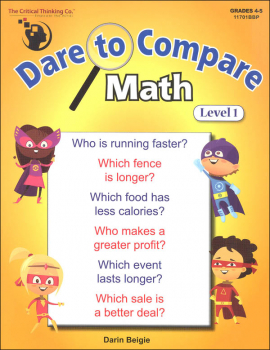