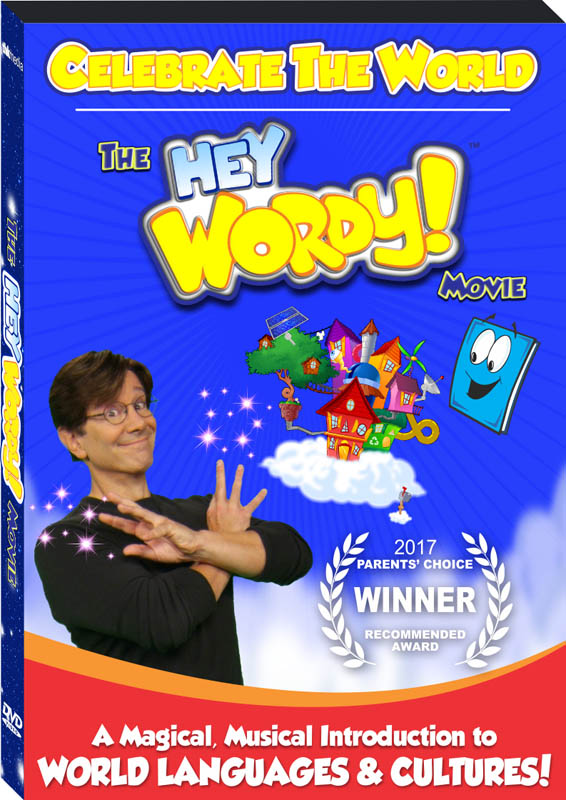 The Hey Wordy! DVD includes a bonus episode, celebrating Cloudy's birthday in multiple languages. The remaining DVD components introduce mini episodes. To play the "Hey Wordy!" trailer, click on the play icon at the upper left of the image.

Climb aboard our flying house as we introduce your children to other languages and cultures from around the globe inspiring them to celebrate difference and each other! Winner of a 2017 Parents' Choice Recommended Award, "Celebrate the World! The Hey Wordy! Movie" takes you on an enchanted, musical adventure down the streets of Paris, through the canals of Venice, and on a magic carpet ride over the deserts of Egyptand beyond! The film also teaches good values such as the importance of friendship and being proud of the special things that make you who you are. With spectacular animation and fully orchestrated original songs, you and your children will be singing in another language before you know it. "Celebrate the World! The Hey Wordy Movie" stars David Burke, internationally renowned language expert and author of over 60 language books and is executive produced by Howard Kazanjian ("Star Wars," "Raiders of the Lost Ark").

Primary Subject
Foreign Language
Grade Start
PK
Grade End
2
ISBN
9781891888601
Format
Other
Brand Name
THK Media
Weight
0.2 (lbs.)
Dimensions
7.5" x 5.38" x 0.5"
Powered by TurnTo
Questions that need answers | My Posts
Start typing your question and we'll check if it was already asked and answered. Learn More
Do not include HTML, links, references to other stores, pricing or contact info.
My question is about: