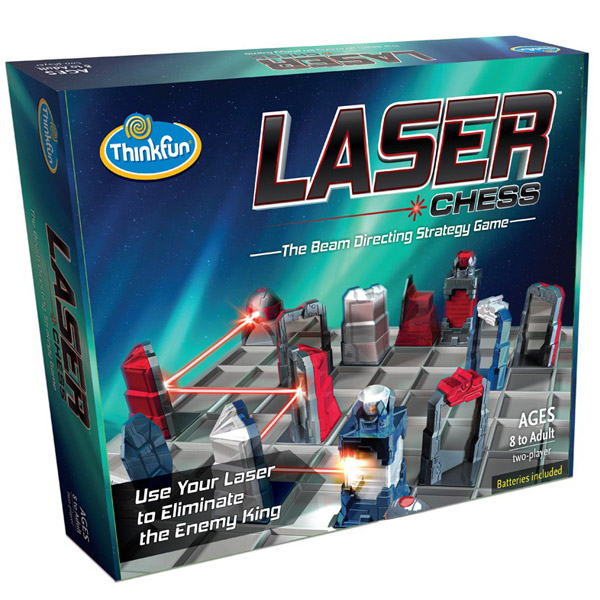 A laser blasts through the air and strikes a mirrored surface. Reflected at a 90 angle, it continues on, bouncing from one mirror to the next until coming to a dead stop on the non-mirrored surface of a playing piece. The triumphant strategist removes the "illuminated" piece from the board, while his opponent scrambles to ensure that the prize, his king, is safe, while endeavoring to adjust the mirrors to his advantage for his own attack. Your turn consists of moving one of your pieces either to an adjacent square or a quarter rotation in the same square, and then pressing the button to activate your laser. The idea is to move the angled mirrors in such a way as to "illuminate" your opponent's pieces (leaving fewer pieces he can move around to his advantage) and eventually strike his king. When you activate your laser, it can reflect off your pieces as well as your opponent's pieces, so all pieces in the laser's path need to be considered on your turn. The strategy requires a lot of careful planning, as you must activate your laser at the end of every turn whether you are ready to or not! The lasers for each player are located at opposite corners of the board. Game includes: 26 playing pieces, two laser pieces, game board and instructions. Batteries are included. ~ Zach

Laser Chess is a two-player strategy game that combines the spatial thinking skills of chess with the high-tech fun of laser beams. Players alternate turns moving their mirrored pieces around the board, and at the end of each turn, players fire a real laser beam from their Laser. The laser beam bounces from mirror to mirror, and if the beam strikes a non-mirrored surface of any piece, it is immediately removed from play. If you illuminate your opponent’s King - YOU WIN!

Primary Subject
Games, Puzzles & Toys
Grade Start
3
Grade End
AD
EAN
4005556763504
Format
Other
Brand Name
ThinkFun
Weight
1.85 (lbs.)
Dimensions
10.5" x 13.0" x 2.38"
Powered by TurnTo
Questions that need answers | My Posts
Start typing your question and we'll check if it was already asked and answered. Learn More
Do not include HTML, links, references to other stores, pricing or contact info.
My question is about: 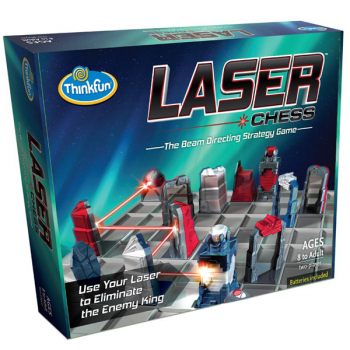