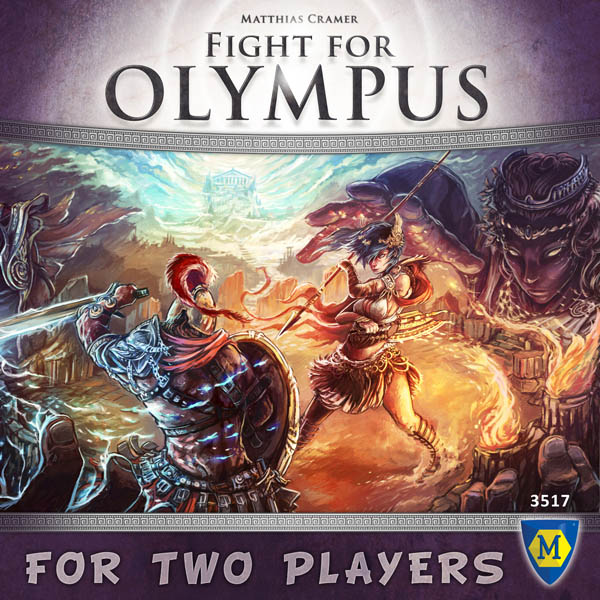 On the shrouded heights of Mount Olympus, the Gods are quarreling; now is your chance to conquer it! In this 2-player game of conquest, each player takes on the role of a Greek leader vying for Mount Olympus, with help from Greek literature's best (and worst) heroes. To begin, players are dealt several cards of common soldiers, equipment, and legendary heroes. Each card has "attack" and "health" values which determine a special ability and how much damage a card can dish out or take. However, more powerful heroes are more expensive to play, requiring players to discard other cards to use them. Cards are placed in front of the board in one of three sections: Olympus, Delphi, and Troy. Once controlled without an opposing card, these areas respectively give players victory points, colored markers to play cards, or extra cards. When opposed, cards deal and receive damage, being discarded when a card's wounds become too severe. The objective is to gain 7 points while fighting off your opponent's heroes; the first player to do so wins the game! While the variety of cards and choices may seem intimidating at first, options are just limited enough to keep players from feeling overwhelmed as they attempt to outmaneuver their opponent. Rounds last about 30 minutes.

Players use the soldiers, heroes and demigods of Greek mythology to battle their opponent! By playing cards to take control of Troy, Olympus and the Delphic Oracle, as you recruit heroes and demi-gods of legend, such as Heracles, Hector and Achilles to increase your capabilities and inch closer to victory!

Strive for a military victory or overwhelm your opponent by controlling all of the locations on the board. Win an exciting duel and become the master of the Greek pantheon!

Powered by TurnTo
Review More Purchases | My Posts
4.0 / 5.0
1 Review
5 Stars
4 Stars
3 Stars
2 Stars
1 Star
0
1
0
0
0
Rated 4 out of 5
Take a sharpie to your cards!
My kids (ages 8-14) are enjoying this game. While it will not teach them the gods, it is increasing their familiarity with them which was my motivation in purchasing. The game play does not have anything objectionable, but there are some cards that show somewhat immodestly dressed women and one that is entirely inappropriate (Andromeda). I took a sharpie to our cards before handing it off to my boys to play.
July 13, 2019
User 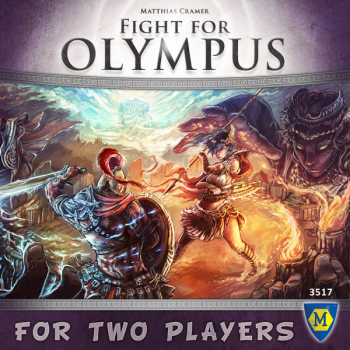