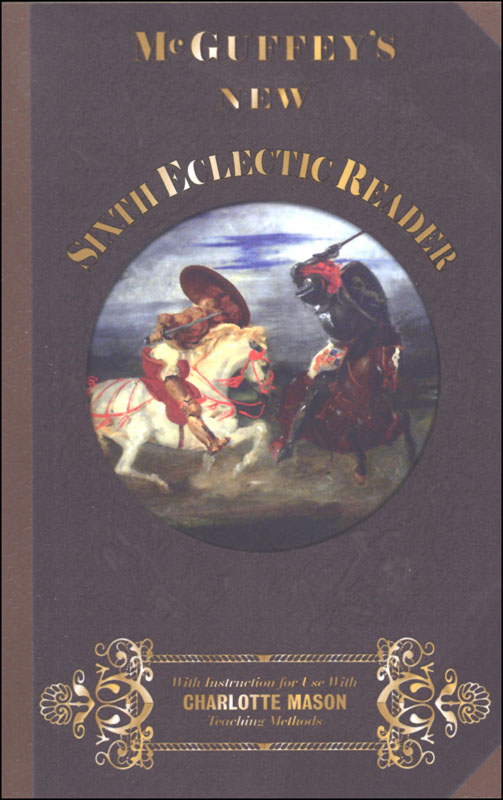 Articulation, Rhetoric and use of the voice. Includes classic works by Shakespeare, Milton, Longfellow and others. Focus: rhetorical reading. (179 lessons.

The sixth reader is described by its publisher as "a rhetorical reading book, for the more advanced classes. It begins with 60 pages of instruction in articulation, inflection, accent and emphasis, reading verse, the voice, and gesture. This is followed by 179 literature-based lessons. These include readings from Sir Walter Scott, Shakespeare, Milton, Longfellow, Lord Byron, Cowper, Patrick Henry, William Pitt, William Cullen Bryant, Charles Dickens, and Dr. Samuel Johnson. Many selections are prefaced by brief biographical notes about the author, which adds interest and context to the reading.

New introduction with instructions for use with Charlotte Mason methods

You may use Charlotte Mason's language arts methods of recitation, dictation, and narration with the lessons in the sixth reader. Instructions for each of these methods is found in the new 18-page introduction that has been added to this edition. Mason's methods blend nicely with McGuffey's reading selections and extensive instruction on elocution.

Features of the sixth reader

In the preface, the original publisher of the 1857 edition outlines the scope of the sixth reader:

This book is presented to the public as the sixth in the remodeled series of Eclectic Readers.As it is designed for advanced pupils, most of the means adopted in the other volumes for aiding the learner, such as Questions, Spelling, &c., are here dispensed with, and the student is left to his own judgment.

The Principles of Elocution, in the introductory article, arc explained and illustrated in a more extended, systematic, and complete form, than in the preceding volumes.

The Reading Exercises, as far as to page 204, are especially adapted to illustrate the principles explained in the introductory treatise. For example, the first five lessons are selected for their especial adaptation to practice in Articulation, although it must be borne in mind, that every word in every lesson is an exercise in articulation.

The Inflections are illustrated, and a guide to their proper use furnished, by an appropriate notation in most of the Reading Exercises as far as to the 73d, on page 204. Among them some are, also, adapted to exemplify emphasis, some, the reading of poetry, and others, are appropriate to practice in cultivating the voice, in its high, low, or medium tones.

From the 74th Exercise onward, rhetorical notation is dispensed with, the learner being left to his own judgment, except such aid as the teacher may think proper occasionally to give, it being supposed that, in the several volumes of this series, all, that could be profitably contained in books, has been furnished.

In the preparation of this work, free use has been made of the writings of standard authors upon Elocution, such as Walker, McCulloch, Sheridan Knowles, Ewing, Pinnock, Scott, Bell, Graham, Mylins, Wood, and many others.

In the selection of articles for Reading Exercises, great care has been taken to present variety of style and subject, to attract by interest of matter, to elevate by purity and delicacy of sentiment, and especially to furnish the mind with valuable information, and to influence the heart by sound moral and religious instruction.

Considerable liberty has been taken with the articles selected, in order to adapt them to the especial purpose for which they are here designed. Much change and remodeling have been necessary. The lessons are therefore credited as taken "from the author named.

By the end of the sixth reader, your student will be working with literary selections from Shakespeare, Lord Byron, Dr. Beecher, the Bible, Washington Irving, Daniel Webster, and other well-known writers and orators. Reading level for tested selections in this book ranged from Flesch-Kincaide grade level 9.4 for an early selection through grade level 12.6. A few passages tested at graduate level, but they should all be accessible to a teen with a good learning foundation.

Like the other readers in the series, McGuffey's sixth reader helps you teach language arts using stories, poems, essays, and speeches that reinforce virtues such as courage, honor, diligence, stewardship, independence, frugality, perseverance, and kindness. Whether you use them as a primary instructional tool or simply as a supplement to your curriculum, I think you'll find the 1857 McGuffey Readers a valuable addition to your home library and classroom.

Homeschool families have cherished the McGuffey Readers for years. Whether the classic tales and academically rigorous content or the nostalgic sentiment that overcomes us as we behold these charming readers, we simply can't get enough. Yet, if you are like me, the struggle to effectively use these classics in your children's education is tangible. Thankfully, Janice Campbell has provided us with Readers with detailed instruction for integrating them into a Charlotte Mason methodology. Focusing on Miss Mason's guiding principles of copywork, narration, recitation and dictation, Mrs. Campbell provides nearly 20 pages of elaboration/teaching on the CM approach on the McGuffey Readers as a core language arts curriculum for today's students (she also notes that families are welcome to simply enjoy the beauty of the McGuffey Readers for reading practice, without embracing Miss Mason's language arts ways).

Each volume contains the original text, graphics, and diacritical markings from McGuffey's 1857 edition, which was carefully selected for numerous reasons. The 1857 editions were the first editions with 6 readers (with readers 5 and 6 added to provide high school literature, reading and elocution practice), and they were the last edition with which Mr. McGuffey was personally involved in reviewing. These readers reflect the values and ideas of the 19th century, which are clearly taught from a Christian perspective. One belief that is occasionally present is the idea that being good or kind is a prerequisite for being loved, and in these rare occasions, Mrs. Campbell counsels parents to stress that negative behavior does have consequences, yet children are always loved. This edition also contains additional teaching notes with a greater focus on articulation and elocution for all ages, something that is sadly missing from today's language arts curricula. Interestingly, Mrs. Campbell shares her long-held personal belief that many spelling and reading difficulties can be attributed to incorrect or unclear pronunciation; and while not guaranteed, her premise of focusing on clear pronunciation and proper expression may provide an advantage to struggling students. See below for content details. The softcover books measure 5" x 7.5", contain 102-448 pgs, and are available individually or in sets. ~Deanne 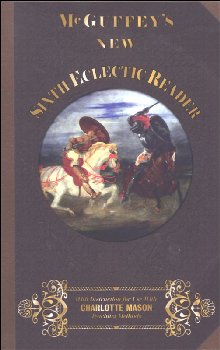