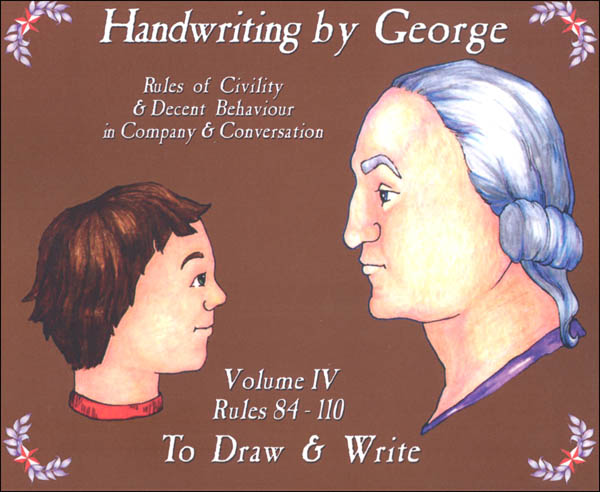 Each volume of Handwriting by George contains 27 or 28 entries from George Washington's noted book Rules of Civility & Decent Behavior in Company & Conversation. Each entry is printed on double-ruled paper for students to copy as penmanship practice. Opposite each handwriting page is a space for the student to depict the rule according to his or her own unique (and quite possibly humorous) perspective. While Washington's musings on etiquette and social interaction were originally written for young ladies and gentlemen of the 18th century, they are more than applicable to kids of today.

"When George Washington was sixteen years old, he began copying 110 maxims forpolite behavior into his schoolbooks. These rules describe the behavior of a gentleman, andmany claim that they greatly influenced Washington's attitudes and standards for his ownbehavior.

Several years ago we became aware of George Washington's Rules of Decency andCivility. We were all tired of the standard handwriting practice book copy material andbegan using Washington's Rules as copy work. While many of them may seem at first onlyto have application to the eighteenth century, they also have a lot to say to modern gentlemenand ladies. We hadn't expected to enjoy these sayings as much as we did. They rarelystayed merely copywork exercise but became the basis of other discussions. "Show nothingto your friend that might affright him," became a part of a discussion about why the childrenshould not torment our guests (particularly the one with the intense mouse phobia) with thedead mouse discovered under the sink. Other rules addressed issues involving puttingothers first and self last - and other ways to show respect to those around us.

In this book, we have included rules 84-110, with other volumes to follow that will completethe set. For each rule, there is space to copy it at least once, and space to draw anillustration. Be sure to talk about the ways you can apply the rule to your relationships withthose around you. Enjoy!"
- Cyndy Shearer

Category Description for Handwriting by George:

Each volume of Handwriting by George contains 28 entries from George Washington's noted book Rules in Civility and Decent Behavior in Company and Conversation. The volumes use a D'nealian-like handwriting font for the exercises (handwriting is more of a slanted Zaner-Bloser manuscript). Each entry is printed on double-ruled paper for students to copy as penmanship practice. Opposite each handwriting page is a space for the student to depict the rule according to his or her own perspective. A great tool for a mini course in manners and penmanship practice. Rachel S. 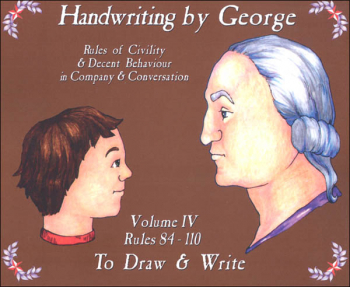