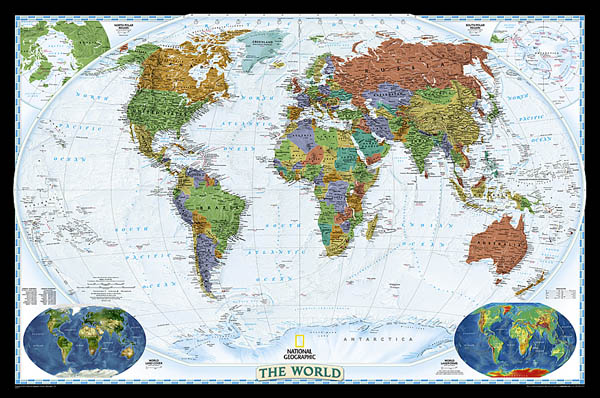 The Decorator style World map uses a vibrant color palette that fills each country for easy identification and stunning shaded relief that will stand out as a beautiful piece of cartographic artistry. Drawn in the Winkel Tripel projection, distortions are minimized and unlike many other World maps, Greenland is show the same size as Argentina and not as the size of all of South America.

Thousands of place names are carefully and artistically placed on the map to maintain legibility even in the heavily populated ares of Europe, Asia and the Middle East. Details include clearly defined international boundaries, cities, physical features, rivers, and ocean floor features. Corner inset maps feature vegetation and land use, and population density as well as the north and south polar regions.

The map is encapsulated in heavy-duty 1.6 mil laminate which makes the paper much more durable and resistant to the swelling and shrinking caused by changes in humidity. Laminated maps can be framed without the need for glass, so the frames can be much lighter and less expensive.

Add some geographical flair to your school room! These colorful maps from National Geographic are available either as standard paper or laminated. The United States map features major cities, geographical features, bodies of water, interstates, and major highways. The World map features countries and states, major cities, international airports, major bodies of water and time zones. The US maps are 43"x30" while the World maps are slightly wider at 46"x30". - Laura 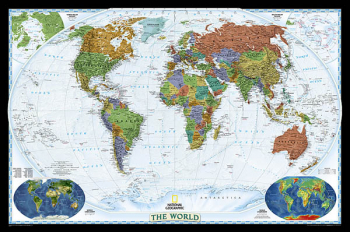