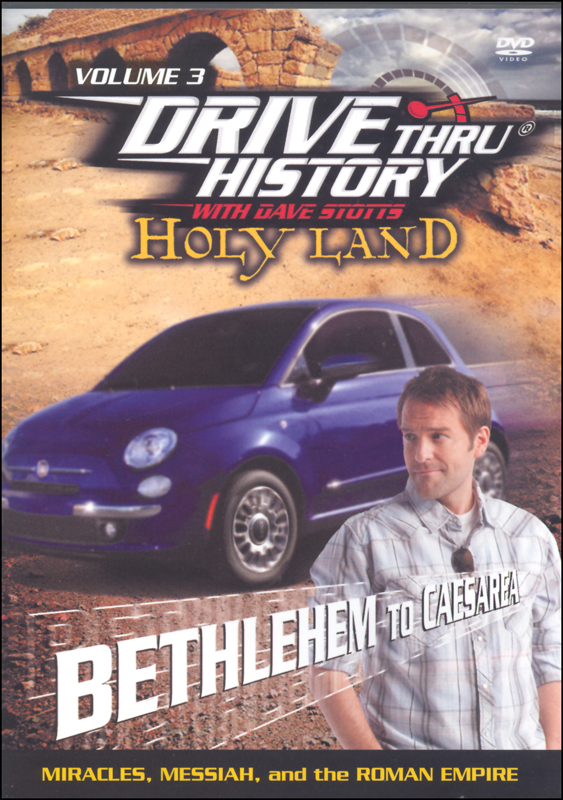 Driving into the history and culture of New Testament times, we begin with the prophecies of the Messiah, and adventure into Bethlehem, Nazareth, the Sea of Galilee, , Capernaum, the House of Peter, Synagogue at Capernaum, Tabgha, Caesarea Philippi and Caesarea Maritima. Children and adults will be captivated as they watch the Bible come alive!
Category Description for Drive Thru History: Holy Land:

Travel through time with Dave Stotts as you learn about Bible lands. In the same format as the previous Drive Thru History DVDs, these 4 volumes travel a humorous, fast-paced, exciting route through the Holy Land. Volume 1 includes 3 episodes - overview and introduction to the series including the patriarchs, Exodus, Lachish, Beersheba; Arad, Dead Sea, Sodom & Gomorrah, and Masada; and King David, Valley of Elah, Ein Gedi, Qumran, and the Dead Sea Scrolls. Volume 2 also has 3 episodes - arrival in Jerusalem, conquest sites, Jericho, and Hazor; Samaria, Shechem, and Shiloh; Jezreel, Meggido, and Tel Dan. Volume 3 Miracles, Messiah, and the Roman Empire transitions to the New Testament, Prophecies of the Messiah, and Bethlehem (including the Church of Nativity, Shepherds Field, and the Star of Bethlehem) in the first episode. In episode two, visit Nazareth, Sea of Galilee, Jesus’ Boat, Capernaum, the House of Peter, Synagogue at Capernaum, and Tabgha. The final episode travels to Caesarea Philippi and Caesarea Maritima. Volume 4 focuses on the temple, cross and the empty tomb. In episode 1: Mount Moriah, Temple Mount, Al Aqsa Mosque, Dome of the Rock. Episode 2: City of David, Pool of Siloam, Mount of Olives, and the Garden of Gethsemane. The final episode covers prophecies, Caiaphas, the crucifixion, resurrection, and the Church of the Holy Sepulcher, plus much more!

Each episode is about 30 minutes (Total DVD is approximately 90 minutes ). You will cover a lot of territory in that short time as you learn about the places you have only read about in the past and enjoy the thrilling ride.

Economy shipping comes through regular mail and has an estimated delivery time of 5-10 business days.

Premium shipping or Priority mail delivery has an estimated 1-5 day delivery time depending on what state the order is shipping to (up to 7 days for AK or HI).

Economy shipping comes through regular mail and has an estimated delivery time of 5-10 business days.

Premium shipping or Priority mail delivery has an estimated 1-5 day delivery time depending on what state the order is shipping to (up to 7 days for AK or HI).

All shipping method times begin after the order leaves our warehouse.
Vote for the best answer above! 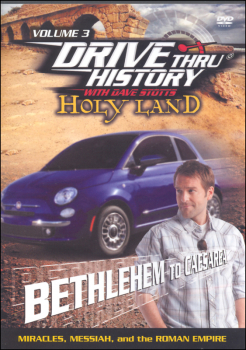