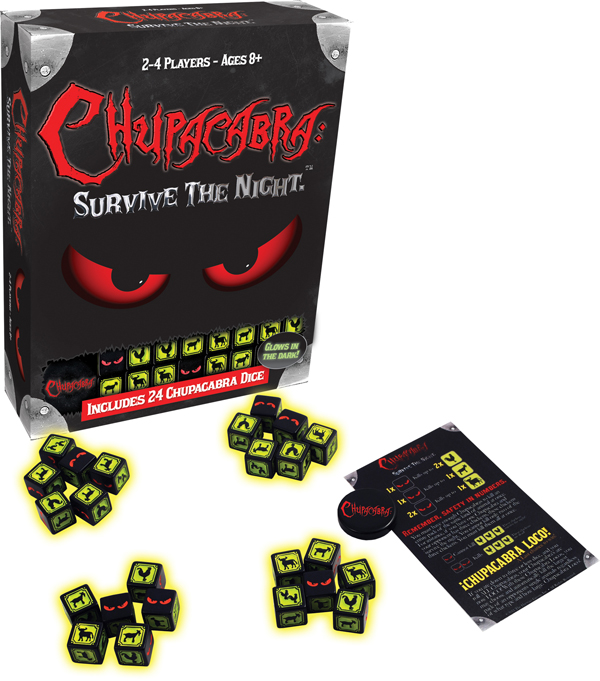 The chupacabra is a legendary coyote-like creature which Latin American farmers believe responsible for killing their livestock during its nightly hunts. Glow-in-the-dark dice allow this attack game to be played in the dark for added eerie effect. Dice are identical, featuring 1 chicken, 2 chickens, 1 goat (on 2 sides), 1 cow, or a pair of chupacabra eyes. Each player gets 6 dice, and one player gets the "first attacker" chip for that round. All players roll their dice at the same time. The first attacker sees how many of his dice rolled chupacabra eyes the more eyes rolled, the more animal dice you can take from your opponents. After the first attacker finishes, all other players get a chance to attack any other player. Dice taken in an attack are off limits for that round, but add to the dice total for the next round, increasing your chances of rolling more eyes or having a larger number of each type of animal so that they are less likely to be attacked. Play continues until one player has all the dice. Games go quickly for the 2-4 players. 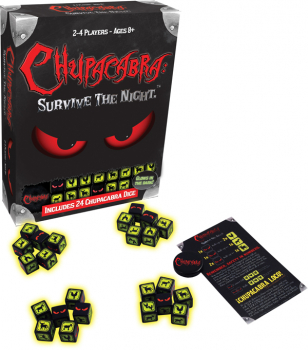