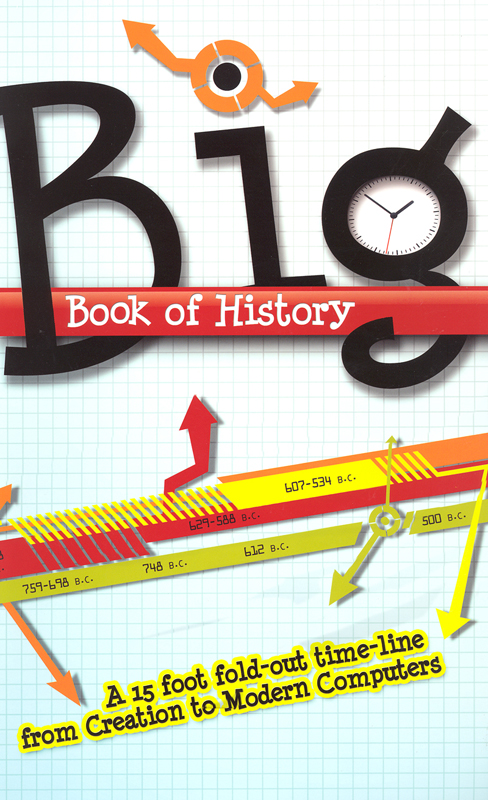 Is there an "Usborne" type book of world history written from a Christian perspective? There is now! The general format will remind you of the Adams Chart of World History (or its predecessor, Wall Chart of World History). It's oversized (11"x 14") and includes accordion-pleated, laminated panels that unfold to 15 feet (20 panels) and allow it to be studied page by page as a book or leaned up against the wall like a timeline. A timeline is exactly what runs through the center of each panel, starting with Creation and ending in 2010. Placed in between are hundreds of historical facts and notable events (like the invention of the tin can in 1810 or diagrams of the inventions of the Hero of Alexander in the first century A.D.). Abundant, colorful graphics include pictures (relics, places, and portraits/busts), drawings (that tin can mentioned earlier), and charts (Roman Emperors who persecuted the Christians). Textual information is varied and fascinating - a little graphic showing the equivalent weight of just one stone from Stonehenge, mini-biographies, an explanation of the history of the Olympic torch - to give you just a tiny flavor. Interspersed with the text are "Did you know?" questions (interesting facts) and questions (Was the fruit really an apple?) which often refers back to the teacher's guide (more about that later). Timeline dates are based on the Annals of World History for biblical dating but coverage is global and includes information from North/South America as well as China and India. Since it's published by Master Books and edited by Ken Ham, you would expect thorough coverage of a biblically-based creation and a catastrophic world-wide flood. You will not be disappointed. The laminated panels of the Big Book of History are available either in bound form (inside hardback covers) or just the Panels (in a clear plastic case).

The Teacher's Guide (30 pgs.) can be used with either version of the Big Book and includes activities and ideas for each panel with numerous web links provided for further study. The first part of the guide (provided for the first several panels) is more extensive and could function as a unit study or Bible study. Also included is a quick, two-page set of hide-and-seek questions for each panel (e.g. When was paper first invented in China? - Panel 10), an index for quickly locating historical information in the Big Book, and a one-page bibliography listing resources for further study.

Just like its secular cousins, this book will bring color, illustration, fascination, and clarity to your world history studies. And you'll never miss those "millions and millions of years" that aren't included. Enjoy! ~ Janice

Primary Subject
History/Geography
Grade Start
2
Grade End
7
ISBN
9780890516324
Format
Other
Brand Name
Master Book Publishers
Weight
1.05 (lbs.)
Dimensions
14.5" x 9.0" x 0.5"
Powered by TurnTo
Questions that need answers | My Posts
Start typing your question and we'll check if it was already asked and answered. Learn More
Do not include HTML, links, references to other stores, pricing or contact info.
My question is about: 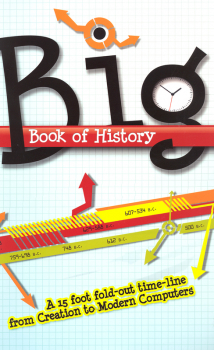