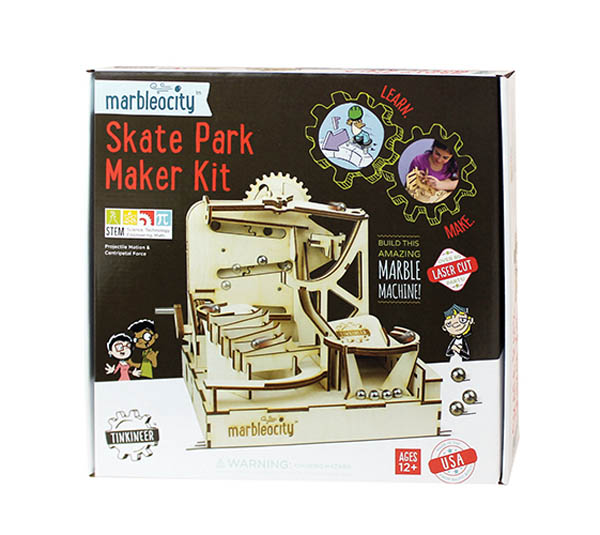 Build your own working skate park model made of real wood! The Skate Park features lots of fun physics action, including a stair descent, rail slide and a jump - so once you build your skate park, you can run marbles through it! The assembly instructions feature a graphic novel with the Tinkineer cast of characters - Kelvin, Joule, Newt and friends - to communicate meaningful STEM concepts in an engaging format. It's a fun way to learn about projectile motion and centripetal force while making an awesome kinetic sculpture!
The Skate Park takes approximately three to five hours to build, and measures 8" when finished. It also connects with the Dragon Coaster (sold separately), so you can expand your marble empire and shuttle marbles back and forth!

Build a working desktop marble coaster out of wood! Each kit comes with dozens of pre-cut wooden pieces, metal axles, a motor, and marbles. Follow the detailed instructions to create the marble run piece-by-piece using household glue, then turn it on and watch the marbles fly. Coasters feature jumps, inclines, ramps, lifts, and more, mesmerizingly illustrating roller-coaster design and physics. Kits come with a "Tinkineer Graphic Novel" which follows a cast of characters (representing physical concepts) who help explain the scientific side of coaster-building.

Primary Subject
Games, Puzzles & Toys
Grade Start
7
Grade End
10
EAN
857479006046
Format
Other
Brand Name
PlayMonster
Weight
2.25 (lbs.)
Dimensions
11.0" x 11.5" x 2.0"
Powered by TurnTo
Questions that need answers | My Posts
Start typing your question and we'll check if it was already asked and answered. Learn More
Do not include HTML, links, references to other stores, pricing or contact info.
My question is about: 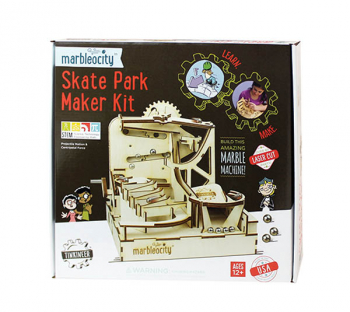