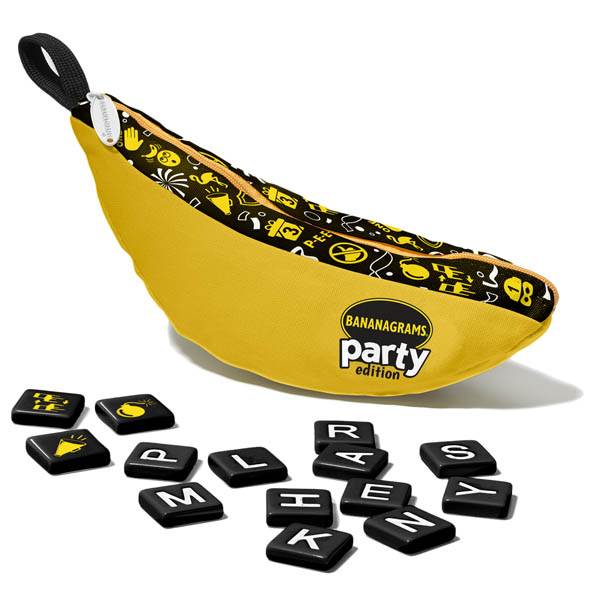 The classic game of Bananagrams with an extra-competitive twist! In addition to standard tiles for a 2-8 player game, this edition adds 14 chaotic "Power Tiles" to the table. When drawn, some tiles allow a player to perform dastardly deeds such as destroy an opponent's word grid, steal tiles, or swap spaces; others force them to do silly things, like play one-handed, with no thumbs, or run around the table before continuing! Undesirable Power Tiles can also be removed with no impact on gameplay.

The Re-Gifter, The Thief, Switcheroo, Pouch Head...these are just some of the names of the 14 chaos-inducing Party Power tiles in BANANAGRAMS Party edition. Each tile holds its own special action, allowing the receiving player to bestow chaos on the victim of his/her choice! Whether it's taking a lap around the game table or demolishing another player's grid, no one is safe! Party Power tiles add chaos to the sneakiest, cheekiest BANANAGRAMS ever!

Primary Subject
Spelling/Vocabulary
Grade Start
5
Grade End
AD
EAN
856739001678
Format
Other
Brand Name
Bananagrams
Weight
0.95 (lbs.)
Dimensions
2.62" x 9.0" x 2.75"
Powered by TurnTo
Questions that need answers | My Posts
Start typing your question and we'll check if it was already asked and answered. Learn More
Do not include HTML, links, references to other stores, pricing or contact info.
My question is about: 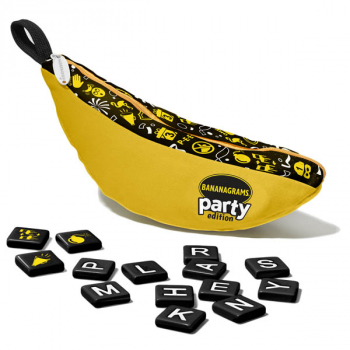