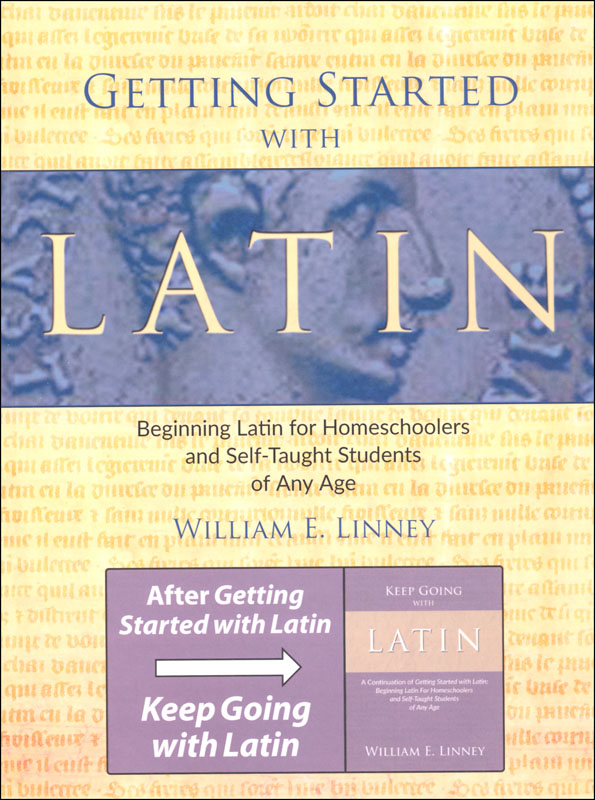 Getting Started With Latin

Subtitled "Beginning Latin for Homeschoolers and Self-Taught Students of Any Age," I could see this book serving as a great introduction to Latin for the family who is not sure they want to jump right into a full-fledged Latin course. Of course, it would be just as useful for an older student (or even Mom and Dad), if they have never studied Latin but want to learn it on their own. The course was designed out of necessity by author William E. Linney, after he was asked by a relative to teach Latin to her children. He set out looking for a course that would not require a Latin teacher, was self-paced, self-explanatory, offered lots of practice exercises, was non-threatening, and inexpensive. When he couldn't find a course that suited his needs, he designed his own. The book contains 134 lessons, which are short (usually less than a page in length), un-fluffy, and incremental in progression. Lessons strike a nice balance between introducing new vocabulary, explaining simple grammatical concepts, and memorization of noun and verb forms. No lesson covers all of these tasks, but instead focuses on one objective and covers it well. Lessons that introduce new Latin vocabulary feature a new Latin word, its English meaning, and sometimes a pronunciation tip. This is usually followed by about ten sentences to translate. Lessons on grammar are also bite-sized, and different forms and cases are introduced gradually. As they are introduced, they are added to a chart, and students will translate sentences that use the forms and cases that they have learned. As charts are filled with endings or forms, students may be asked to memorize them, to aid in future lessons. Just for fun, "Latin Expressions" are scattered throughout the book. In each one, the author takes a common Latin phrase like "caveat emptor," or "etc." and explains the Latin history behind each phrase. Don't underestimate how these little "sparks" of knowledge whet your appetite to learn more! By the end of the book, students will have stockpiled basic vocabulary of around 100 words, be comfortable translating simple sentences in Latin, and have a grasp of basic Latin grammar.

There are a couple of aspects of this course worth noting. First of all, because the book is more of a text than a worktext it is not designed to be consumable. For translation purposes, the author recommends translating the sentences in a separate notebook. If extra practice is desired, you may wish to translate the sentences back to the form given in the lesson. Secondly, while we all realize that pronunciation is very difficult to teach "out of a book", the author has considered this, and has come up with an ingenious solution. He has provided MP3 audio files free of charge on his website, which can be downloaded and used with the lessons. As an added bonus, you can choose from either classical pronunciation or ecclesiastical pronunciation. Audio commentary on the lessons and a host of other helpful resources is also included on the website. Lastly, this course would be excellent prep for an older student who will be studying Latin in high school or college who hasn't had the benefit of laying a basic Latin foundation earlier in life. ~Jess

Getting Started With Latin

Powered by TurnTo
Review More Purchases | My Posts
4.9 / 5.0
9 Reviews
5 Stars
4 Stars
3 Stars
2 Stars
1 Star
8
1
0
0
0
Rated 5 out of 5
So fun! Nice bite size lessons. I’m enjoying learning along side my son.
September 9, 2021
Tabitha F
Purchased
6 months ago
Rated 5 out of 5
Great Resource
This is an excellent resource for a slow and gradual start to a language that neither the teacher nor the students has any previous experience. We are learning a lot and having fun too!
September 12, 2020
Danielle A
Purchased
1 year ago
Rated 5 out of 5
love it
This is our third Latin curriculum that I have tried, and the first one that we enjoy. Simple short lessons that keep building until you realize that you have learnt so much since the beginning of the book!
September 29, 2018
jane c
Purchased
over 3 years ago
Rated 5 out of 5
My kids love Latin because of this book. I recommend it to anyone just starting out.
September 9, 2018
Lou L
Purchased
over 5 years ago
Rated 4 out of 5
A very simple and straightforward introduction to Latin. It's easy for me to teach and has been just right for my 9 year old and 8 year old to begin with.
March 16, 2016
Lisa A
Rated 5 out of 5
I was looking for a good starter Latin before jumping to buy an expensive program this fit the bill perfectly! We are using this program over the summer It's simple short lessons but really kid friendly and I can help my daughter even though I've had no previous experience with Latin The lessons give great information and I really love how it's only one book(answers are in the back) I feel like this is a great confidence booster as well our daughter was nervous to attempt Latin but all her fears went away when she opened this book the format is just so friendly and such a good first experience and exposure They also offer a free online mp3 file to listen to the pronunciations of Latin very helpful Glad we purchased and would highly recommend as a first introduction to Latin
June 25, 2013
Kristen Pooley
Rated 5 out of 5
We have been homeschooling for years and I have bought just about every latin program out there They were all overwhelming for the kids Getting Started With Latin was so easy One word a day That's all The words get used in sentences for translation It seems so easy but they're learning! The kids beg to do latin every day They fight over who gets to translate the sentence My daughter substitutes latin words into her everyday writing just for fun As a result we'll be moving on to more traditional programs next year With the basis we're getting from Getting Started it should be easy
January 8, 2013
Heather Smith
Rated 5 out of 5
Loved this book!! After trying multiple other Latin programs I tried this one in a last attempt to even try to teach Latin Wow! Very clear concise lessons that make Latin accessible to even non-Latin knowledgeable moms And after finishing up this book my son has easily transitioned into Henle Latin I highly recommend this book for beginning Latin as an affordable and highly effective First Start to Latin
May 27, 2011
katie berry
Rated 5 out of 5
As a mom with no prior Latin experience I was looking for a program that would serve as an introduction to Latin but not break the bank This book really served our family well The pace is very manageable within our already busy homeschool schedule and it has been fun to learn along with my 4th grade son I anticipate looking for a Latin program that is more in depth when we finish this book but I have benefited greatly from this resource The added bonus of downloadable lessons has been very helpful when I need help with pronunciation or require further explanation of concepts I don't mind that the book is non-consumable b/c it is easy to have the children write out their translations in a separate notebook If you are looking for an inexpensive way to give Latin a "whirl" in your homeschool I would highly recommend it I think it has given our family a nice introduction to Latin Now that we have a modest foundation in latin I will be more comfortable paying more money for a Latin program that will go into greater depth Instead of being frustrated with a new and intimidating language our family was turned onto Latin!
March 28, 2011
Gemma Kibben