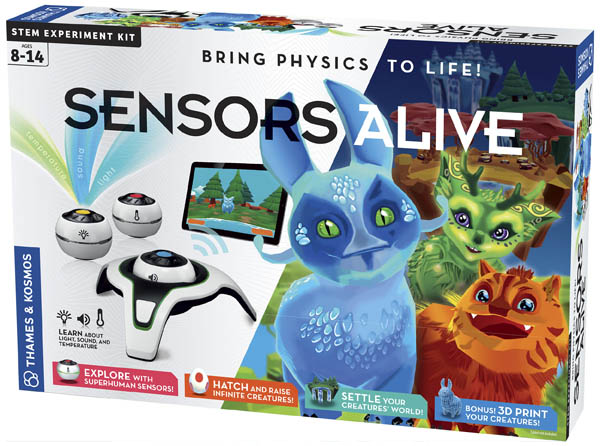 Apply physics in creative ways. Using this set’s 3 sensor pods, collect information about light, sound, and temperature in your environment. Use those readings to affect animated creatures and their environment. Download the app onto a Google® tablet or iPad and transfer your sensor readings using the base station to your virtual animated environment. Hatch and grow creatures and take care of them in the game-based bio-engineering lab. Temperatures can affect growth and development. Light readings can affect the eyes and ears of your creature. You can control attributes directly on the app. Care for your creatures, feed them, and play with them as you learn about the physics behind light, sound, and temperature. Set includes 3 sensor pods and 1 base station. You will need 8-AAA batteries, a small Phillips-head screwdriver, and a tablet or smartphone with internet access. Compatible with Android™ 4.4.2 or later, IOS 8.1 or later, and must support Bluetooth® 4.0 or later. ~ Donna

Demystify abstract physics phenomena like light, sound, and heat as never before with this highly innovative, gamified sensor physics lab. The core of this science kit is an app-based video game in which you use real-world sensor data that you collect from your environment to generate a diverse array of creatures. Create, collect, play with, and take care of your creatures in the app.

In a pretend bioengineering lab inside the game, kids play the role of scientists who use readings taken from three physical sensor pods outside the game. The readings are then transferred into the game via the base station. The sensor data dictates the different attributes your bioengineered creatures will have. For example, if you take a low temperature measurement, the creature generated will have long hair to keep warm. If the temperature is high, perhaps it will have scaly skin like a lizard. Or, a low light level captured by the light sensor might yield a creature with huge eyes to see better in the dark, while a high sound level reading might result in a creature with tiny ears. Additional attributes are controlled directly by settings in the app. Combined together, all of these variables lead to a seemingly infinite number of creatures you could create.

Continue to use the sensors to capture data that lets you care for your creatures, feed them, play with them, create habitats for them, and generate more creatures all the while developing an intuitive sense of the different measurements you are taking with the sensors. You will gain experience in measuring light levels, volumes, and temperatures with the three sensor pods, and learn about the physics behind light, sound, and heat. Learning physics comes alive as you see the tangible results of your sensor experiments. 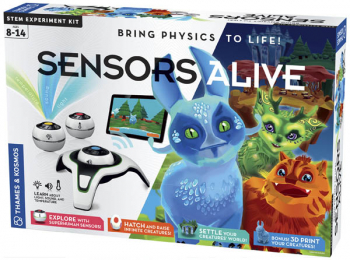