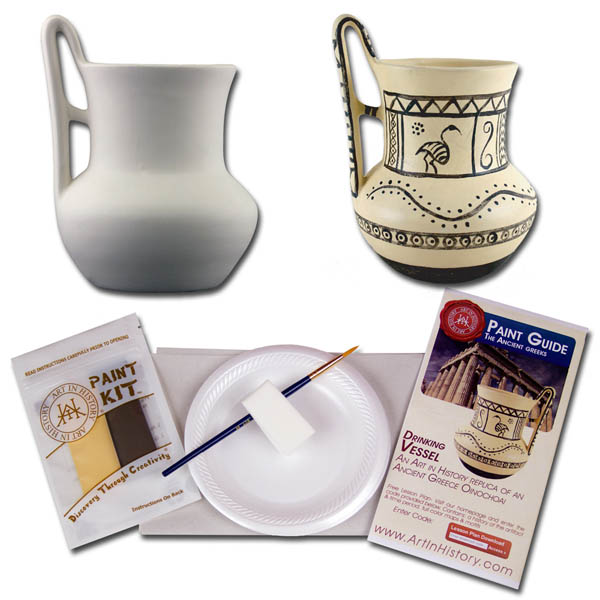 Art In History's replica allows all ages 7+ to explore the Ancient Greeks in a fun and engaging activity.

Join Art In History in an exploration of the Ancient Greek Geometric Period.

Greece, the birthplace of Democracy, was approximately the size of modern-day New York. Mountains cover seventy-five percent of Greece. The country consists of a peninsula and many outer islands. By 750 B.C., the polis, or city-state, became the center of Greek life. The term politics comes from this Greek Term. Each polis surrounded a hill that was fortified on top. This building was called the acropolis. The acropolis in Athens is one that is used in most pictures of Greece. Between 750 B.C. and 700 B.C. Homer wrote the Iliad and the Odyssey. These epic poems tell the story of the Trojan War. Homer's epics tell a great deal about life in Ancient Greece, stressing certain ideals (or values) and the importance of human excellence. The best evidence of Ancient Greek activity, both historically and culturally, has been provided by archaeological finds of pottery.

Replicate the Greek Vessel Homer would have used in 750 B.C. and let the learning begin today!

Primary Subject
History/Geography
Grade Start
3
Grade End
AD
EAN
850497005022
Format
Other
Brand Name
Art in History
Weight
1.2 (lbs.)
Dimensions
6.25" x 6.25" x 6.25"
Powered by TurnTo
Questions that need answers | My Posts
Start typing your question and we'll check if it was already asked and answered. Learn More
Do not include HTML, links, references to other stores, pricing or contact info.
My question is about:

Powered by TurnTo
Review More Purchases | My Posts
5.0 / 5.0
3 Reviews
5 Stars
4 Stars
3 Stars
2 Stars
1 Star
3
0
0
0
0
Rated 5 out of 5
Awesome little jar
This little jar was perfect. I couldn’t find anything else close to this anywhere. Most jars of this type are repainted and expensive. I wanted to put my own touch on a piece and this was perfect.
It’s nicely formed and paints well. What a great buy for the price! Thank you for selling these I will be buying more
June 13, 2022
Bryan P
Purchased
7 months ago
Rated 5 out of 5
These kits are fantastic!
February 1, 2022
Deborah O
Purchased
10 months ago
Rated 5 out of 5
Great Art Project
My children loved painting these for our Greece unit. I love that everything you need is included. It made it very simple to complete this fun art project.
October 18, 2021
Beth N
Purchased
1 year ago 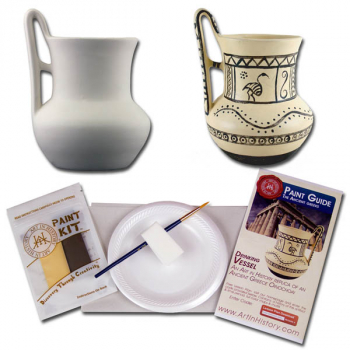