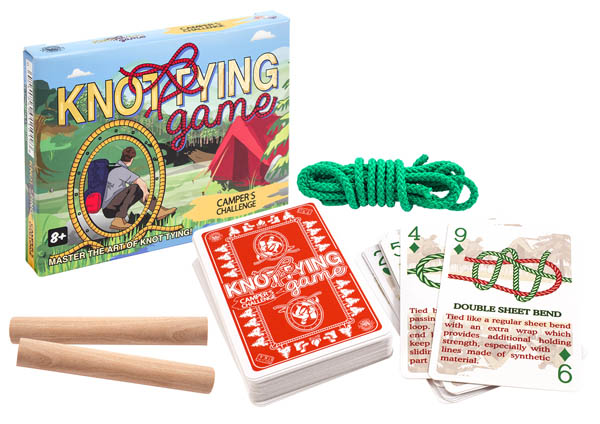 This neat little game introduces players to 44 different knots, then tests them on tying these as quickly and accurately as possible to win points. Each playing card in the deck features a different knot, its name and use, and a point value. As soon as a knot card is turned over, players race to be the first to tie the knot and then toss it in the center of the player's circle. If the knot is tied correctly, the player wins the card. If two players "tie" (no pun intended), then the card is replaced in the deck to be used later. The small game includes knot cards, a rule card, two lengths of nylon cord and two small wooden "posts" which is enough for two players. However, you can add more players by supplying more cord and some round sticks or blocks. Several additional cards explain the importance of knots, the strengths of different knots and the parts of a rope. Although knot-tying books abound, the competition, speed, and variety of knots in this game will definitely promote memorization of the knots for practical use - or for the next round of play! - Jess

Powered by TurnTo
Review More Purchases | My Posts
4.3 / 5.0
3 Reviews
5 Stars
4 Stars
3 Stars
2 Stars
1 Star
2
0
1
0
0
Rated 5 out of 5
Creative gift!
This is a game that is both educational and creative. This is a great gift for adventurist and firefighters.
January 14, 2021
Lisa C
Purchased
4 months ago
Rated 3 out of 5
Great Idea, but
It was fun to learn all the different knot types and how to's in one place, but do yourself a favor and pick up an additional cord as they almost all require 2 cords. Not sure why the game only came with one. Otherwise, it was fine.
January 4, 2021
Stacey S
Rated 5 out of 5
Great Game for one person or the whole family
I bought this one as a gift for the young friend who works in our rural area, and really needs to learn knots. I was given the game by my husband over a decade ago...I kept the cards in my pocket as I worked at the farm, so I could always figure out a great knot for what I was doing. A wonderful item.
December 20, 2018
karen b
Purchased
over 2 years ago 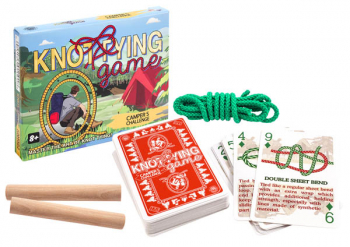