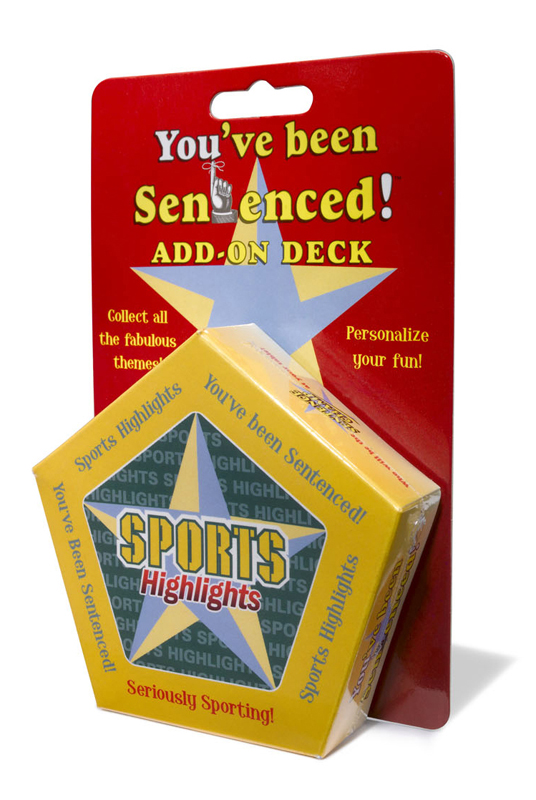 Category Description for You've Been Sentenced:

Looking for a fun word game that's not too taxing? This game prompts players to use random words to create grammatically correct sentences. 540 pentagon-shaped cards are included . There are five words on each card (usually a variation of one word like full, fill, fills, filled, and filling), which means a total of 2700 words used in the game, including wild cards that can be used for any word. A four-page rulebook is included that describes several game variations. The basic game consists of all players drawing ten cards and trying to form a correct sentence using them. Optimally, players want to use all ten words in a sentence for maximum points, but sentences can be as short as two words. Each player knocks on the table to signal that they are finished, and after all players are ready, they read their sentences out loud. Other players then vote on if each sentence is correct, with the player being judged making arguments as to the validity of the sentence. Much of the fun of this game comes from hearing the stories players must make up to prove a sentence like "The duck keeps giving me flames instead of nuts." makes sense. Each player with a correct sentence gets points for their cards (value of cards is based on difficulty of words) with a bonus ten points for using all cards. The first player to 200 points is the winner. Official score sheets included, 3-10 players.

Want even more words? Two add-on decks are currently available (with more in the works). Brain-Buster deck includes 400 "SAT-worthy" words from the first half of the alphabet (M-Z deck to come at later date), and NASA Space Terminology deck features 400 space-related words, including names of astronauts.

Primary Subject
English/Writing
Grade Start
3
Grade End
AD
ISBN
9780641843235
Format
Other
Brand Name
McNeill Designs
Weight
0.3 (lbs.)
Dimensions
6.12" x 4.12" x 1.5"
Powered by TurnTo
Questions that need answers | My Posts
Start typing your question and we'll check if it was already asked and answered. Learn More
Do not include HTML, links, references to other stores, pricing or contact info.
My question is about: 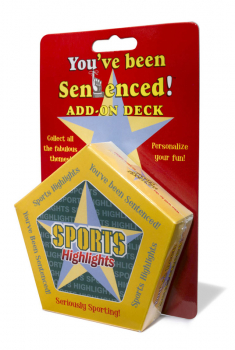