God the Creator (Institutes of the Christian Religion)

Speaks to our knowledge of God the Creator as he reveals Himself through Scripture. 294 pp.

"I believe in God, the Father almighty, creator of heaven and earth. . . ." Calvin clearly shows how God is the Creator, Preserver, and Governor of the world and everything within it. He is the sovereign and omnipotent Ruler of the universe.

Though this should be obvious to everyone, Calvin explains that our total depravity has stifled and corrupted our knowledge of God and His role in the creation. He discusses the manifestations of God in both nature and the Scriptures, and reveals that God exists in three separate persons: the Holy Trinity.

Calvin also shows how the Fall of Man has let to spiritual blindness and confusion. He thoroughly discusses the image of God (in which we were created), free will, and original righteousness. He shows how mankind has wandered far afield from God's original intentions. The book concludes with a full discussion of divine providence.

Charles Haddon Spurgeon wrote, "The longer I live, the clearer does it appear [to me] that John Calvin's system is the nearest to perfection."

John Calvin (French: Jean Calvin, born Jehan Cauvin: 10 July 1509 27 May 1564) was an influential French theologian and pastor during the Protestant Reformation. He was a principal figure in the development of the system of Christian theology later called Calvinism. Originally trained as a humanist lawyer, he broke from the Roman Catholic Church around 1530. After religious tensions provoked a violent uprising against Protestants in France, Calvin fled to Basel, Switzerland, where he published the first edition of his seminal work The Institutes of the Christian Religion in 1536.

Considered by many to be the definitive work of Christian theology, John Calvin's Institutes of the Christian Religion is available from Bridge-Logos in four beautifully presented volumes. This version is translated by Henry Beveridge and contains the same additional material in each book that readers will find helpful for historical background and learning more about the person of John Calvin: the original translator's preface, the note from the original printers to the readers, the prefatory address (John Calvin to Francis, King of France), Calvin's epistle to the reader (prefix to his last, revised edition), and The Life of John Calvin by John Foxe (of Foxe's Book of Martyrs fame). Closing out each book is a study guide, a list of one hundred aphorisms from the four books, A Defense of Calvinism by Charles Haddon Spurgeon and a summary of the Five Points of Calvinism. All books are paperback. ~ Zach 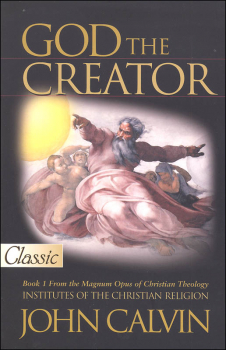