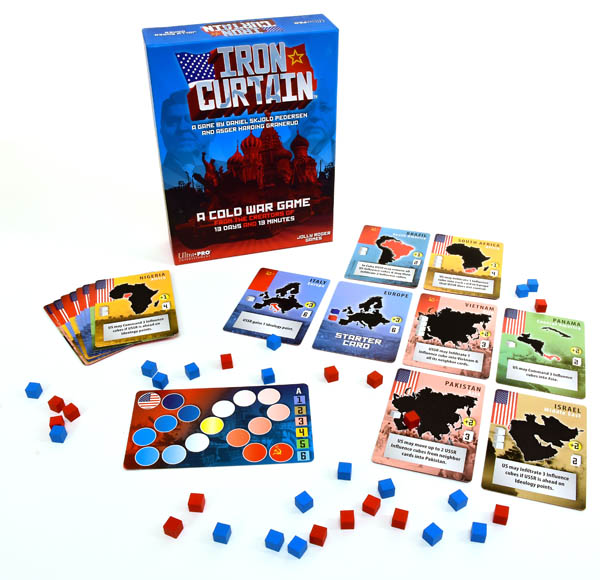 Grand strategy in a tiny package! In this head-to-head game of shrewdness and ideology, players respectively control the US and USSR during the Cold War. The goal is to spread your nation’s ideals across the world, cementing your influence and ousting your opponent’s backwards doctrines from critical countries. Belying the grand scale of this war of principles is a mere 18 Strategy Cards and 48 Influence Cubes in two colors. The “Europe” starter card plays center stage as the game begins. Strategy cards are dealt to each player; Cards have both a “Country” and “Action”. Countries are split across six regions, forcing players to jockey for supremacy across three countries in each region. When a card is played, it expands the map and allows the player to add new influence cubes to the board. Cards also offer enticing “Actions” – such as moving cubes, gaining victory points, or adding cubes in a special way. If the country is aligned with the player’s nation, they can choose between the influence cubes or taking the action; however, if it’s aligned with the opponent, the opponent gets to take the action on your turn! These small elements of strategy combine to form a fast-paced, tense contest of wits that can be played in 20 minutes or less. For two players ages 12 and up.

An Iron Curtain descends in this micro game version of a battle between superpowers. Players take on the roles of the U.S. and U.S.S.R. as they attempt to dominate regions and battlegrounds, asserting influence to that victory ends up within their political reach.

Dominate battlegrounds (majorities, area control and domino effects)
Play through the Cold War in 20 minutes
From the creators of 13 Days and 13 Minutes
Construct the world to your advantage
Colorful graphics and intriguing game play 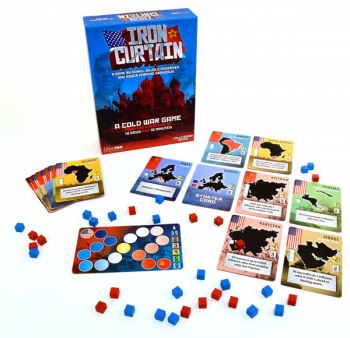