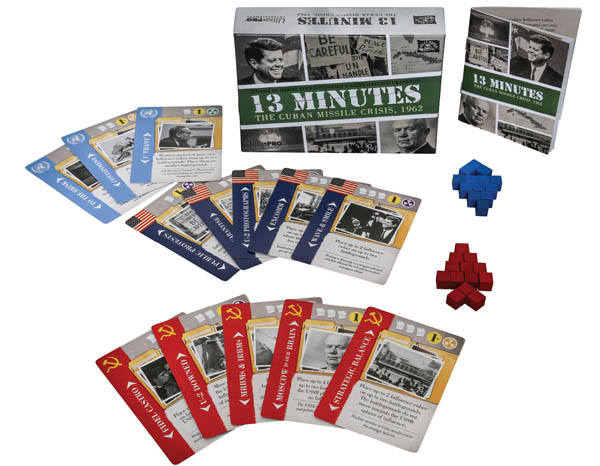 Establish Cold War dominance in 13 minutes or less! Players take control of Kennedy and Khrushchev, spreading influence and jockeying for control across the globe without triggering nuclear war. 13 strategy cards, aligned with the US, UN, or USSR serve as the core element of gameplay. Cards serve three purposes: as battlegrounds for placing influence cubes, to place more Influence Cubes, and as special rule-breaking Actions. Three imaginary spheres of influence occupy the table between players: US, Neutral, and USSR. Players can place cards in their sphere or the neutral zone; once played, cards immediately become a battleground, and the race is on to have a majority of influence cubes. The player then chooses to use the card for its Influence Cubes, or the Action if it aligns with the UN or the player’s nation. However, if the card aligns with the opponent, they can choose to use the special Action before you benefit! When each player has only one card left, the game ends, and influence cubes are tallied, with majorities earning prestige points. The player with the most points wins. Yet the greatest danger remains: nuclear war. If players end up with three matching DEFCON symbols on cards in their sphere, they trigger nuclear war and lose the game. Avoid disaster and show the world your power! For two players ages 10 and up.

The world was never closer to global nuclear war than during the Cuban Missile Crisis in October 1962. Nuclear missiles launched from Cuba could reach Washington in a mere 13 minutes! Can you navigate this world of superpower brinkmanship without triggering World War Three? Inspired by the acclaimed game '13 Days', '13 Minutes' lets two players re-fight the crisis in a tense card game in... 13 Minutes!

13 Minutes is a card-driven micro game with tough decisions. Playing as either President Kennedy or Khrushchev, your aim is to exit the Cuban Missile Crisis as the most powerful superpower. During the game you will play five Strategy cards that you use to place Influence cubes on battlegrounds to score majorities, or to manipulate battlegrounds. Played cards turn into new battlegrounds so the world map is ever changing. Be careful, because each decision is important and you may trigger global nuclear war. 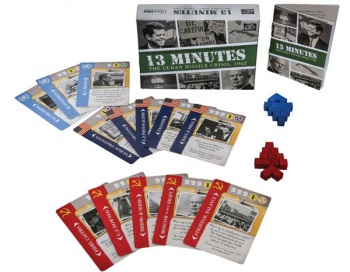