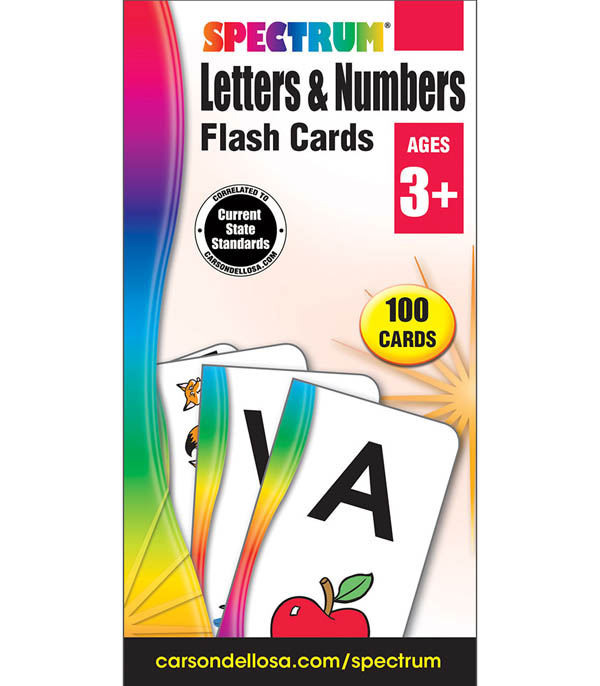 Spectrum(R) Letters & Numbers Flash Cards support essential skills for early childhood education. With practice in counting and number and letter recognition, children ages 3 and up build a foundation for reading and math readiness.

Each of these 100-flashcard sets includes colorful 3" x 6" flash cards for helping your young ones learn some of their basic skills. Two cards in each set includes game suggestions.

First Words includes 78 one-sided, picture/word cards - each card has one word with a picture of the object. There are also 20 cards with sets if rhyming words - one word with picture on the front and two more words with pictures on the reverse. Play games like rhyming catch, word recognition, sound memory, word fish, and more.

Letters & Numbers has 52 double-sided letter cards - one card for each upper and lower case letter of the alphabet. Each letter card shows the letter with an object that begins with that letter and an object on the back as well. For consistency, the same object is shown on the front of both the upper and lower case cards - this helps children to make the connection between the letters. 46 number cards are also two-sided - numbers zero through ten with the numbers on one side and number word on the back, numbers 0 through 25 with that number of objects on the reverse, and tens cards (10 - 90) with the number on the front and the matching number of ten-frames on the back. Game suggestions include sound search, letter drills, number recognition, draw a number and more.

Create your own games using these sets, add them to your curriculum, or leave them out so children can play on their own. Spectrum has some good supplementary workbooks for early learning, and these flash card sets would be a good complement to them. ~ Donna

Primary Subject
Early Learning
Grade Start
PK
Grade End
1
ISBN
9781483816784
EAN
044222243586
Format
Other
Brand Name
Spectrum
Weight
1.0 (lbs.)
Dimensions
6.25" x 3.38" x 1.75"
Powered by TurnTo
Questions that need answers | My Posts
Start typing your question and we'll check if it was already asked and answered. Learn More
Do not include HTML, links, references to other stores, pricing or contact info.
My question is about: 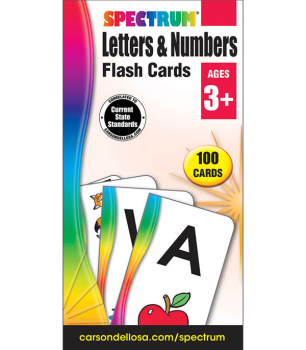