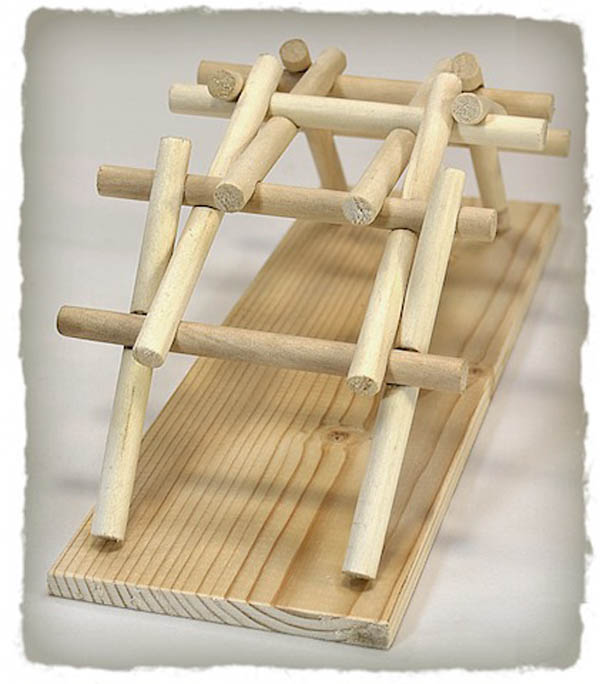 9 x 4. This "Emergency Bridge was a fast bridge-building technique thought up by da Vinci himself! Perfect for LEGOs or other small toys.

Leonardo da Vinci lived in warring times and he realized that one of the ways to stay safe and make some money was to have local powerful Dukes and patrons support him in his endeavours. At the time, Ludovico Sforza (Il Moro) was Duke of Milan and was a patron of many artists and architects, including da Vinci. During his time in Milan (and later on) he designed a number of interesting bridges. Having a good engineer to design castles, and weapons to defend (and keep invaders at bay!) was very useful for these Dukes and Kings, and Leonardo rose to the occasion and sketched many weapons - and means of defense for his patrons.

Leonardo made a number of cool bridge designs. As part of a civil engineering project for Sultan Bayezid II in 1502, he made a drawing of a single-span 240-meter (790 ft) bridge designed to span the Golden Horn Inlet (the name of the water body it was to cross). While never built,(the technology to make it didn't appear for another 300 years) its elegant lines have inspired a beautiful footbridge in Norway based on this design!

Leonardo also designed an early swing bridge, as well as a two-decked bridge for movement in two directions at once - the first commuter bridge!

Since early times engineers have designed many different types of bridges, each specific to the area it was needed. When there was river traffic, they would have to be high, or lift or swing, and when long they have to be cable stayed. Leonardo seemed to have considered many types of bridges and while he is famous for other things, there is little question he should also be famous for his bridge designs!

Powered by TurnTo
Review More Purchases | My Posts
5.0 / 5.0
1 Review
5 Stars
4 Stars
3 Stars
2 Stars
1 Star
1
0
0
0
0
Rated 5 out of 5
Perfect addition to our DaVinci unit study!
We absolutely LOVED this kit! I’m kind of “engineering-impaired” so I was a tiny bit nervous about starting our homeschool study on Leonardo daVinci with a bridge building activity. I definitely didn’t need to worry. The bridge building instructions were super clear and we had our bridge constructed in less than five minutes. The bridge is made out of pretty sturdy materials too, so we were even able to SEE how the bridge grew stronger once weight was added to the top. We were also able to discuss the ease of deconstruction and how that might have helped armies move around in enemy territory. My son was captivated from start to finish! I paired this with The Who Was Leonardo daVinci book by Roberta Edwards and several other daVinci models. It was a memorable and fun unit study. I highly recommend this one!
May 26, 2021
MountainMama 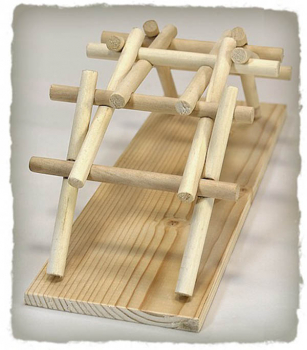