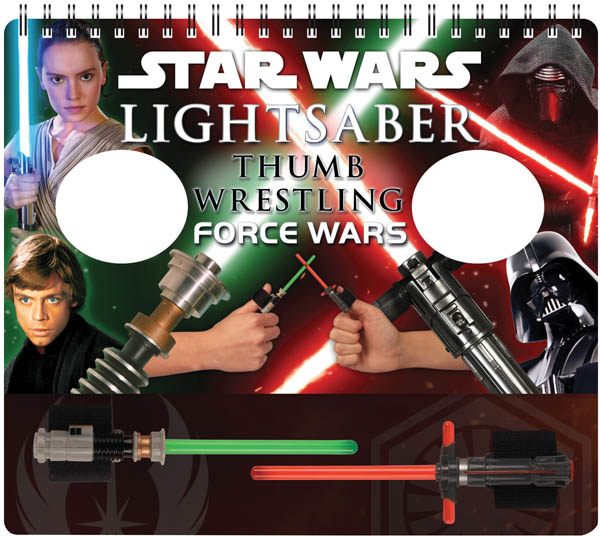 Includes a green lightsaber and Kylo Ren's light saber, featuring seven different duels spanning all seven films including the battle on Starkiller Base.

Capitalizing on the lightsaber cool-factor, this book will evokethat must-have reaction among Star Wars fans of all ages. Itwill encourage social and imaginative role-playing, promote thesharing of Star Wars trivia, provide satisfying quick victories,and serve as an outlet for Star Wars competition, among other delights.

May the Force be with you" in this second title in the bestsellingLightsaber Thumb Wrestling series. This Star Wars game in abook pits thumb against thumb in a quest for galacticdomination. Jedi in training can simply attach the two plasticlightsabers to dueling thumbs with Velcro, open to one of theseven "game board" spreads to set the stage for battle, anduse the Force (of thumb and imagination) to wrestle to victory!Featuring all-new match-ups and scenarios spanning the entiresaga-including The Force Awakens -this innovative game isperfect for Star Wars fans of all ages."

May the force be with... your thumbs? That's right! These game books include two 4" long lightsabers that Velcro onto your thumb as well as 7 different game scenes to play in. You can recreate classic battles from the films such as Obi-Wan and Darth Maul's duel in the reactor just after Qui-Gon's death, Rey and Kylo Ren on Starkiller Base, or the classic scene where Luke Skywalker confronts Darth Vader in Cloud City. Another fun element is that each of these scenes has its own rules to keep each battle fresh. Rules determine things like the amount of times you can be disarmed, ways to beat your opponent, and length of battle. The back cover of the book has slits for your thumb-sabers while not in use. So which will you choose? Will you master the Force with the Jedis, or will you join the Sith and learn the ways of the dark side? - Laura 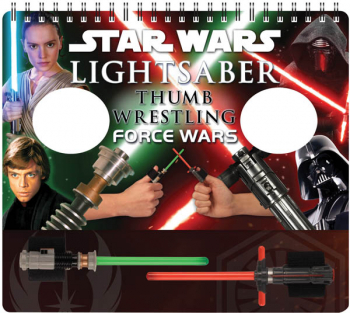