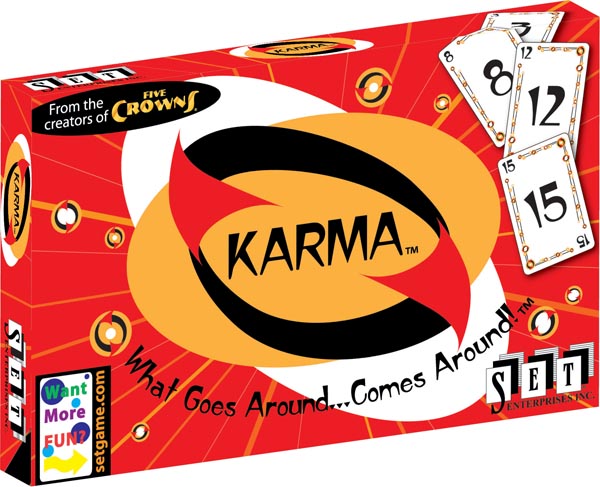 What comes around goes around in the game of Karma! The goal is to get rid of your cards without getting stuck with the discard pile! There are 60 game cards numbered 1-16 (three of each number) and four different "karma" cards (also three of each). Each player must play a card that is equal to or a higher number than the previous one discarded. If a player cannot match or beat the previously discarded card, he must pick up the entire discard pile. If a player has a "karma" card, it can be played at his turn. These "karma" cards might include giving the whole discard pile to another player or taking the card at the bottom of the discard pile and placing it on the top. The more players, the more fun the game becomes! Illustrated instructions are included. 2-6 players (can be played with up to 12 by combining 2 games). ~ Gina

Powered by TurnTo
Review More Purchases | My Posts
5.0 / 5.0
2 Reviews
5 Stars
4 Stars
3 Stars
2 Stars
1 Star
2
0
0
0
0
Rated 5 out of 5
Great Game!
Ordered 3 of this game from Rainbow Resource Center and the ordering process and shipment were great. I will order from them again!
April 28, 2020
Laurie H
Purchased
1 year ago
Rated 5 out of 5
Great game!
Our game group loves to play Karma. At first we weren't so sure,
but by the time the game was over, we played it again. Love playing it - you never know how the game is going to change.
December 29, 2018
Sharon M
Purchased
over 2 years ago 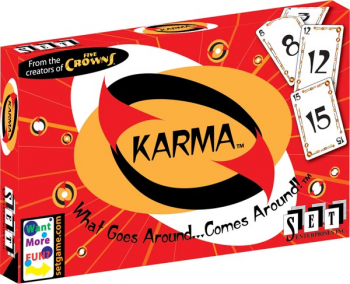