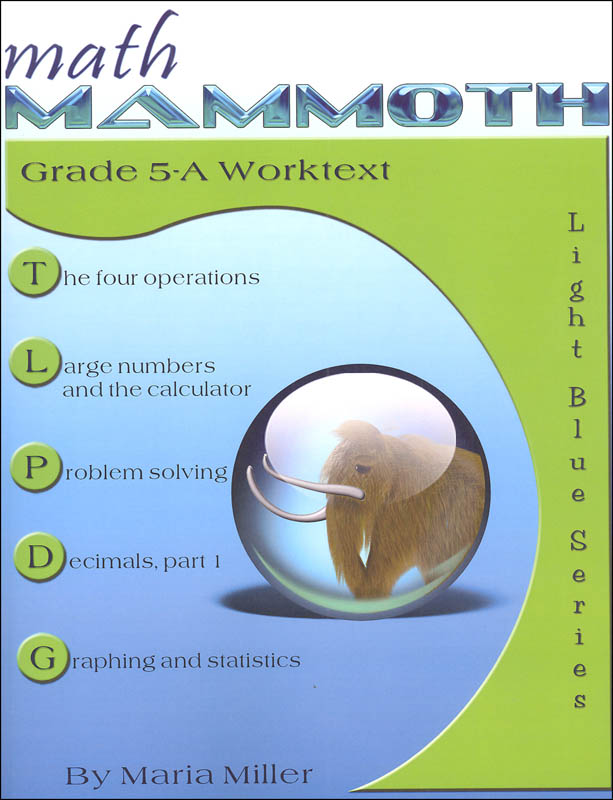 The two books (worktext part A and part B) deal with:

The fifth grade is time for fractions and decimals, in particular. In part 5-A, we study decimals in depth and with substantial detail. Students also deepen their understanding of whole numbers, learn much more problem solving, and get introduced to the calculator.

The year starts out with a study of whole numbers and their operations. Students get to review multi-digit multiplication and learn long division with two-digit divisors. We also review divisibility and factors from fourth grade, and study prime factorization.

In the second chapter, the focus is on large numbers and using a calculator. This is the first time a calculator is introduced in Math Mammoth complete curriculumthus far, all calculations have been done mentally, or with paper and pencil. I want students to learn to be critical in their use of the calculatoruse it with good judgment. Every exercise where calculator use is to be allowed is marked with a little calculator symbol.

The third chapter is about equations and problem solving. We study simple equations with the help of a balance and bar models. The main idea is to get students used to the idea of an equation and what it means to solve an equation. Students also do a fair amount of problem solving using the visual bar model.

The fourth chapter is about decimals and their operations. It is a long chapter because now is the time to learn decimal operations well. It is assumed that the student already has a solid foundation for decimal place value, as taught in Math Mammoth 4th grade curriculum. That is the true means of preventing common misconceptions, or students resorting to rote memorization of the decimal operations.

In chapter 5 we study graphing in a coordinate grid, line and bar graphs, and average and mode. Today's world has become increasingly complex, with lots of data in the media, so our children need a good grasp of graphs to be able to make sense of all that information.

Chapter 6 is about the addition and subtraction of fractionsanother focus topic for 5th grade, besides decimals. Students learn to add and subtract unlike fractions, using the technique of first converting them to equivalent like fractions.

In chapter 7, we study the multiplication and division of fractions (division only in special cases), relying first on visual models, and then proceeding to the abstract shortcuts.

Chapter 8 takes us to geometry, starting with a review of angles and polygons. From there, students will learn to draw circles, to classify triangles and quadrilaterals, and the concept of volume in the context of right rectangular prisms.

Theres a whole lot to like about this well-conceived and inexpensive math program. The main features of this program, according to author Maria Miller, are:

These are all valid claims and sum up this approach nicely. Its linear approach is similar to that of the MCP Math program. Topics are introduced, studied in depth, then the student proceeds to the next topic. Visually, it reminds me of Developmental Math because of the extensive use of pictorial representations. Users posting online have compared the course to Singapore Math, but I don't really see much similarity. While they both emphasize conceptual learning and mental computation skills, Math Mammoth has a much more traditional feel. A distinguishing feature of this program is the authors amazing ability to simplify and clarify math processes so children can understand them easily. Even in printed form, this course is the easiest on the budget using a strictly by-grade comparison. And for those purchasing the complete program on CD (or download), the savings are even greater. Imagine getting a complete, masterfully taught math curriculum for grades 1-7 for less than $150. I would call that frugal and smart.

Each Grade Level Set consists of four components: Student Workbooks A & B, an (optional) set of Tests and Cumulative Reviews, and an Answer Key containing answers to both workbooks and tests. Currently, we carry the curriculum in print format or CD format by the grade level, Grades 1-3 and 4-7 combined on CD, and the entire course on CD. The course is also available as a download (go to mathmammoth.com site) for slightly less than the CD price. Both download and CD have colored student pages. All grade levels of printed materials are now available in your choice of black and white or color. Currently, the CDs also include bonus software, Soft-Pak - for Windows only (math, language arts and testing).

Student Workbooks A and B for each level have varying numbers of chapters, each focusing on a math topic. These are sometimes very broad. For example, one very large chapter (68 pages!) in Worktext 4-B is simply titled, “Division”. It reviews division, and then covers every facet of fourth grade division. Since division skills are being built step-by-step throughout the chapter, there’s really no need for review or testing until the end; but it does make for a long teaching unit. Each chapter begins with a short introduction. This is where you will find any teacher instruction for the chapter, including background information, strategies and ideas for teaching lesson concepts, a summary of lessons by title (including number of pages for each), and a list of Helpful Internet Resources for further exploration, practice and enrichment. If the chapter is on a skill introduced in a previous grade, the skill is reviewed before the new material is introduced. Lessons each include a complete explanation of each skill being taught, numerous examples and models (many visual) to help students understand the concepts behind the math, and a reasonable number of problems for students to work to ensure comprehension.

The lessons vary from 1-5 pages each. For planning, the author suggests simply dividing the number of pages in each book by the teaching days rather than planning to teach a lesson a day. This would generally mean covering 1-2 pages a day depending on grade level. After the last lesson in each chapter there are one or two reviews. Chapter tests are contained in the separate Tests and Cumulative Reviews Book, as are cumulative reviews (taken upon completion of each worktext chapter) and a comprehensive test for the grade level. A nice feature is the inclusion of grading instructions and scales. If remediation is indicated, the author provides a website (www. homeschoolmath.net) for additional math worksheets by grade level and skill. Worksheets are randomly generated within your provided parameters, so each is different.

Use the Skills Review Workbooks books alongside the Math Mammoth curriculum to review concepts that are being taught. Each book is divided into chapters that correspond with the curriculum chapters. These workbooks are optional, and are intended for those who want a spiral review. Each review in the workbook is one page in length and includes a variety of math exercises. Students might write math equations, color pictures, or solve puzzles to put their math skills to the test. Some children require more practice than others, so use only the review pages you need. Skills Review Workbooks are printed with color for a little more visual appeal, and the number of reviews vary from book to book. Answer Keys are a separate book and are also printed in color.

As mentioned briefly before, I find the author’s teaching methods very solid, efficient, and effective. Her goal is to imbue the student with an understanding of the concepts in math rather than just how to solve problems and this is evident in her instruction. She consistently shares strategies, “tricks” and revealing insights into the mysteries of math, essentially putting a teacher right on the page. An example is in teaching beginners to add numbers with sums greater than 10. She tells students that when adding 9 to a number, the 9 “really wants to be a ten”, so you should take one from the other number to make it a ten, and then add the rest. I have seen few other curriculums (see Miquon Math) that teach students alternate, flexible ways like this to approach operations. Another feature I liked in the book was using gridded workspaces for solving problems. Especially for students just starting to use multiple-digit operations, it’s helpful to get them in the habit of keeping answers neatly aligned in columns. I also like the scale problems in Grade 4’s multiplication and other chapters. These are much like the ones in CTP’s Balance Math program and very effective for understanding how equations work. There’s also a healthy balance of word problems in the lessons with realistic, practical contexts. The geometry sections are particularly good, too, with ample hands-on work. The author even includes printable manipulatives for constructing your own geometric solids. 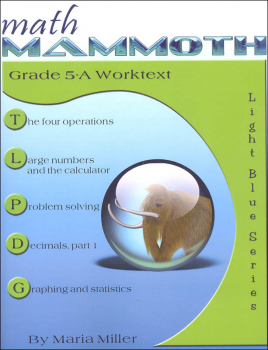