Translated from the original book, which was written in Arabic, Fountain and Tomb tells the story of a young man and his life in Cairo, Egypt in the 1920's. The story is told in first person as through someone reliving their childhood and what life was like at that time both the good and the bad, and the diversity within the city. 120 pgs, pb. ~ Donna

"I enjoy playing in the small square between the archway and the takiya [monastery] where the Sufis live. Like all the other children, I admire the mulberry trees in the takiya garden, the only bit of green in the whole neighborhood. Our tender hearts yearn for their dark berries. But it stands like a fortress, this takiya, circled by its garden wall. Its stern gate is broken and always, like the windows, shut. Aloof isolation drenches the whole compound. Our hands stretch toward this wallreaching for the moon." So begins Naguib Mahfouz's Fountain and Tomb, a kaleidoscopic novel set in Cairo during the 1920s. The narrator tells tales of the streetof separated lovers, childhood games, workers, neighbors, loneliness. In his alley, his small slice of Egypt, he finds the excitement and harshness of Cairo at the one end, and the withdrawn but beautiful world of the sanctuary at the other. 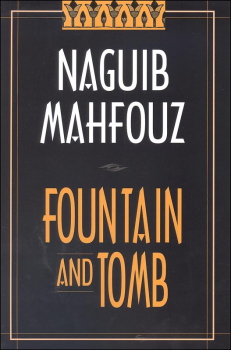