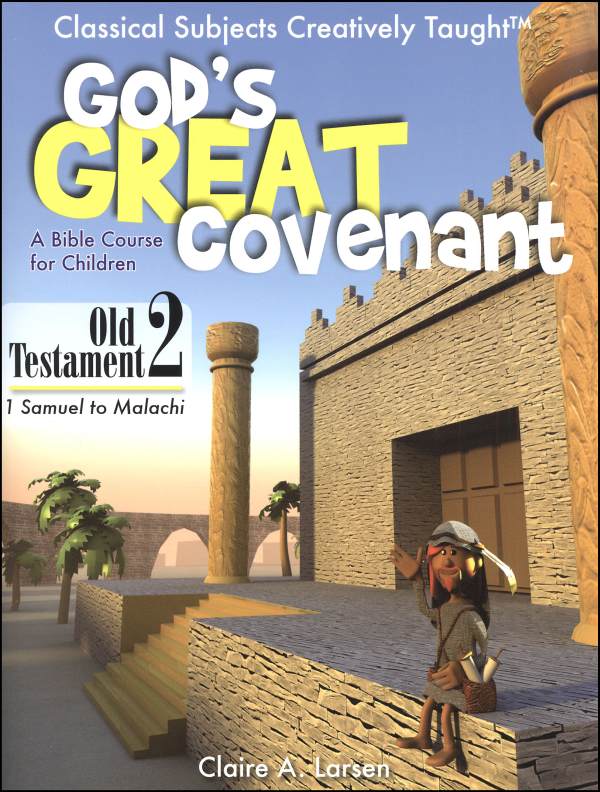 The Bible tells us God’s story. It has many parts, but from beginning to end, it is one story with a promise throughout: “I will be your God, and you will be My people.” Through this story, we learn who God is, who mankind is, how the world came to be, and how God worked through history to bring redemption to His people. The God’s Great Covenant series will narrate this story for your student in an engaging and unique way.

God’s Great Covenant Old Testament 2: A Bible Course for Children continues to follow the journey of God’s people as they become the nation of Israel. By chronologically studying the second half of the Old Testament from Samuel to Malachi, students will see how the God of Israel keeps and renews His covenant with His people. Students will also learn the ways in which the Old Testament forecasts the coming kingdom of Jesus Christ in the New Testament. The text studies various prophets in their contexts so their lives and words can be understood in relation to their own times as well as times to come.

The student edition has 32 weekly chapters divided into 5 themed units. Each chapter includes the story of that week’s Bible verses, presented at a clear, elementary reading level, and a memory page with a Bible verse, key facts chart, and vocabulary. A thought-provoking “Who is God?” question encourages students to consider how to relate to God in their own lives. There are also worksheets and a weekly quiz to accompany each weekly lesson.

Unit I: The Early Kingdom—The God Who Anoints. In 100 years, the scattered tribes of Israel would become a mighty kingdom with a powerful army, a magnificent palace, and a world-renowned king. God made this happen through three men, Samuel, Saul, and David, each of whom was specially chosen and anointed by God to serve Him.

Unit II: The Glorious Kingdom—The God Who Blesses. For years, David waited and trusted in the Lord, believing God's promises. David became king and through his reign, God's covenant with him and his kingship were linked—this was the Lord's plan for His people.

Unit III: The Divided Kingdom—The God Who Reigns. King Solomon's reign came with wealth, fame, wisdom, and many blessings from the Lord. The tragedy began when Solomon forgot the Lord and His greatness. In the next eighty years, the northern kingdom of Israel would have eight kings, none of whom served the Lord. But in the darkness, some light shone—and even in a divided kingdom, the Lord reigned supreme.

Unit IV: The Remnant Kingdom—The God Who Judges. The glorious kingdom that became the divided kingdom became the remnant kingdom. All of Israel's kings did evil in God's sight, resulting in His righteous judgement. Behind the suffering, God still showed mercy. The nation would one day be restored, and the promised Messiah would someday come. God was still King, and He would not forget His covenant with His people.

Unit V: The Exiled Kingdom—The God Who Restores. Israel and Judah turned down a path of rejection of God, resulting in the fall of Jerusalem and exile to Babylon. During those long years of exile, the Lord purged idolatry from His people, and they started to yearn for the coming of the Messiah. The Old Testament may conclude here, but it does not end the story—the King who has been keeping His kingdom safe will come in person.

This curriculum uses stories found in the Bible to reveal the faithfulness of God to elementary students. There are four titles in the series, two on the Old Testament and two on the New Testament. Each course is designed to take one year to complete at the elementary level. Bible excerpts are taken from the NIV version.

Components include the Teacher’s Edition, which offers teacher’s notes and answers, and the consumable (non-reproducible) Student Book Numerous supplements are available to enrich these Biblical studies. These are optional, but available to help your family be successful in the study of God’s Word.

Powered by TurnTo
Review More Purchases | My Posts
5.0 / 5.0
1 Review
5 Stars
4 Stars
3 Stars
2 Stars
1 Star
1
0
0
0
0
Rated 5 out of 5
We love it
Easy to use and comprehensive. Each chapter includes a story, memory verse, a cross-word puzzle and a quiz all based on the facts of a chapter in the Old Testament. The extra cost of the teacher edition was worth it because it includes clearly labeled background information about the book of the bible being studied. We spend about one hour per chapter including the quiz. We work on this book one time a week. Because I only have a superficial understanding of the Bible I needed something that would lay out all the information for me. The ease of this curricula has been essential in keeping us on track with studying the bible.
April 13, 2017
User
Purchased
over 5 years ago 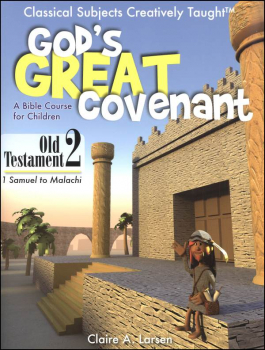