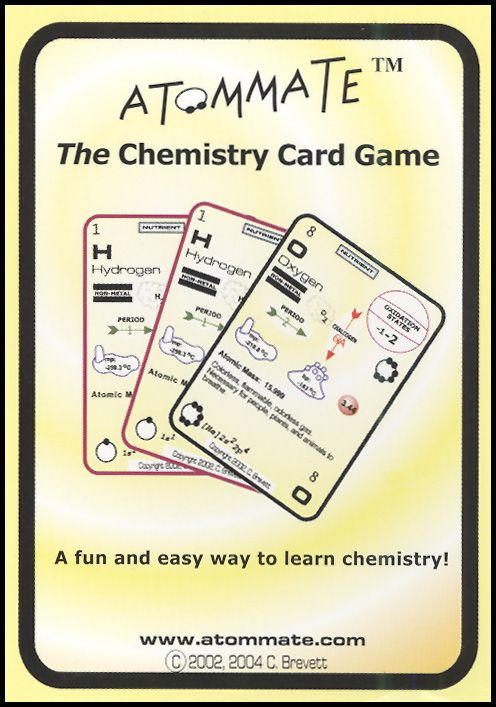 It's easy to find games to practice, say, multiplication. Chemistry? Well, let's just say your choices are pretty limited. However, Atommate fills in the gap! Versatile, portable, and well-organized, this game features 56 cards and instructions for seven games at several different levels. The deck includes cards for 32 elements, with multiple cards for common elements like oxygen and hydrogen. There are also four Oxidize cards and four Reduce cards which are used in the more advanced games. The element cards feature a lot of information, including the element's atomic number, symbol, name, oxidation states, period, group, valence electrons, electronegativity, melting point, sublimation point, boiling point, atomic mass, phase at room temperature, and electron configuration. While it sounds like a lot, the layout is fairly graphical, so the end result is not too overwhelming. While many of the games involve making compounds, one of them plays like "war," using the atomic numbers, and another challenges players to collect four cards of the same group or period. The most advanced game has players making compounds, with the ability to "steal" other players' compounds using the Oxidation and Reduction cards. Many of the games could be enjoyed by younger players as long as they had some understanding of the chemistry terms and concepts. On a final note, no chemistry is explained in the rules, so you will find the more complex games much more enjoyable if you are currently studying, or have studied, some basic chemistry. On the other hand, I'm sure you can find multiple flashcard and quiz uses for the element cards too! Jess

Primary Subject
Science
Grade Start
3
Grade End
AD
EAN
186826000186
Format
Other
Brand Name
Simbre
Weight
0.25 (lbs.)
Dimensions
3.5" x 2.5" x 1.0"
Powered by TurnTo
Questions that need answers | My Posts
Start typing your question and we'll check if it was already asked and answered. Learn More
Do not include HTML, links, references to other stores, pricing or contact info.
My question is about: 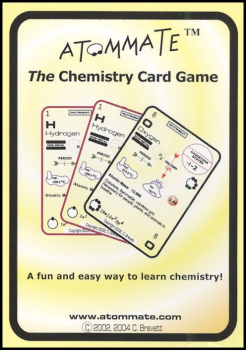