Don't skip past these because you see "doodles" in the title! These are fantastic early writing and concept skill books! I really love these books; in fact, I skip over most letter and number handwriting practice pages in typical pre-school and kindergarten books in favor of these much more engaging abc and 123 titles! And the time title is so much more fun than typical pages of clock faces. The format of the abc (lowercase practice) and 123 books are the same. After several pages practicing holding a pencil and tracing lines, each set of facing pages concentrates on one number/letter (one set of pages per letter, three sets for each number, except just two for 10). The left-hand page holds one large and three medium numbers/letters to trace, each outlined in gray with dot guides inside and strokes numbered, plus several small gray numbers/letters to print over. The facing right-hand page looks like a page from a doodle book with simple black and white illustrations, with the appropriate number or letter worked into the illustration and appearing in gray for children to copy, finishing the doodle. It’s such an appealing and clever way for children to practice their letters, and so much more fun than just writing over and over again on lines! 5’s are half of alien’s face/antennae, 3’s complete elephant’s ears, m’s become an icing pattern on a cake, and w’s are monster’s teeth! A themed scene at the end incorporates all of the numbers/letters. Each scene would be fun for children to color too. The shapes book is similar, practicing shapes and then tracing them in scenes to finish the doodles (rectangles as semi truck trailers, hearts as butterfly wings) but also has pages for children to spot a number of certain shapes in a picture and then finish the scene like a regular doodle book. For instance, find the six hearts on the queen, then finish decorating the skirt of her dress. The time book begins by covering time concepts such as parts of the day, seasons, years, months, weeks, order (first, next) before and after, seconds, hours, etc. Each concept has simple explanatory text and a fun doodle. The second half of the book covers clocks with numbers and hands, offering lots of practice drawing hands and telling time while doodling, as well as exploring half and quarter hour increments. One example of a doodle page is “At quarter past four, it’s time for a haircut. Draw the hands on the clock. Give the lady a crazy new hairstyle.” A clock appears in the upper right corner and the simple illustration shows a bald woman in a barber chair. Finishing with a few pages on digital clocks, your kids will have learned and doodled just about everything time related! Can you tell I love these books? It’s hard to picture a child not having fun learning with these! 7.5” x 9.5” 63pgs, pb. ~ Steph 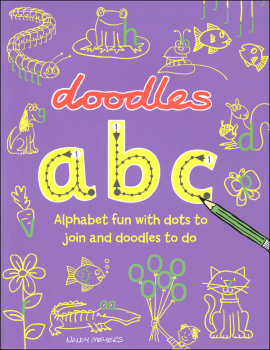